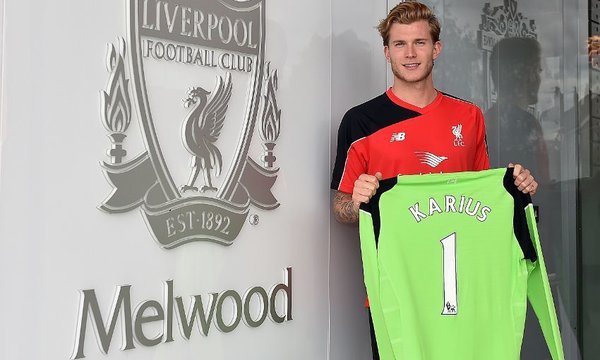 After new Liverpool ‘keeper Loris Karius put pen to paper on a five year deal at Anfield on Tuesday, speculation was already swirling that the Germany international — who came in just behind Bayern Munich shot-stopper Manuel Neuer in voting for the Bundesliga’s best goaltender last season — was brought in to replace current incumbent Simon Mignolet after the Belgian had yet another patchy season between the sticks.

“Germany has a history of outstanding goalkeepers, and Karius is clearly very talented, but playing for Mainz and playing for Liverpool are two different things,” said Reds legend and Champions League winner Dietmar Hamann on the Colin Murray show yesterday. “His task now is to make that step up to the next level. I was a bit surprised when I saw the photos that he has been given the number one shirt…but I think he will start the season as Liverpool’s number one goalkeeper,” mused the former German international. “Klopp said in a press conference that he wants someone to challenge Mignolet, and the fact he has the number one shirt makes me believes he will start the season in goal. Something could happen, he might not hit the ground running,” he said, before adding, “But I think something extraordinary has to happen in pre-season for Mignolet to keep goal in the first game.”

Karius, brought in from Bundesliga outfit FSV Mainz 05 for a reported £4.7mil, became Jurgen Klopp’s third signing since taking over as Liverpool manager back in October, following the likes of Schalke 04 centre-back Joel Matip and Red Star Belgrade midfielder Marko Grujic in the Anfield entrance. While he’s not the big name signing that a lot of the Reds faithful have been hoping for, the former Borussia Dortmund manager is known for taking talented, lesser known players and really tapping into their potential. Now, whether or not he’ll do that with Karius playing second fiddle to Mignolet remains to be seen, but even if he was brought in to have a shot at the first team, Klopp isn’t very well going to say so at this early stage, now is he?.

“I am delighted we have signed Loris, he has had a fantastic season with Mainz and has developed into a very good goalkeeper since his return to Germany,” enthused the Liverpool manager. “I am really pleased that we were able to move so quickly to get him and that Loris has shown such a desire to come to Liverpool with a lot of other clubs interested in him,” continued Klopp. “I know he will add to the quality we have in this position and I look forward to working with him and all our players when we return for pre-season.”