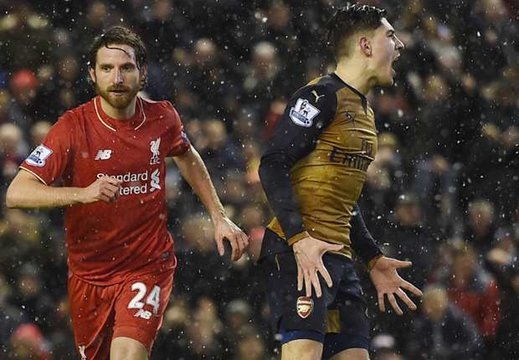 Swansea City have made no secret of their desire to re-sign midfielder Joe Allen four years after he followed then boss Brendan Rodgers from the Liberty Stadium to Anfield and yesterday they apparently made their interest official with news of a bid of £8mil doing the rounds. While this has yet to be verified, it’s believed that the Reds would entertain offers in the region of £10mil for his services — that is, if they even decide to let him leave in the first place.

With only one year left on his contract and talks over a new deal on hold until after the European Championships, the Welshman’s future on Merseyside is less than assured. The player himself has made no indication that he’s angling for a move away, but has expressed disappointment at only being used sparingly. A key cog in the Wales machine as they topped Group B to set up a mouthwatering clash with Northern Ireland in the next round, his profile has risen substantially and apparently it’s not just the Swans who are interested in recruiting the diminutive 26-year old.

While it comes as no surprise that Rodgers, who took over at Scottish giants Celtic last month, has expressed an interest in Allen, now Europa League treble winners Sevilla FC are also keeping an eye on him as a potential replacement for Éver Banega. The Argentine has been on fire at the Copa America over the last month and it sounds like it’s only a matter of time until his move to Italian side Inter Milan is confirmed. That, of course, leaves the Spanish side in a tight spot considering how important Banega has been to their style of play, but it’s a role that Allen could very well be brought in to fill.

If not Spain or Scotland, it sounds like he has options on the domestic front as well with the likes of Leicester City and Southampton also being linked with an interest in taking him on board. Again, that all depends on whether or not the Reds decide to part ways. Liverpool boss Jurgen Klopp hasn’t exactly hidden his admiration for Allen’s all action style of play, but in the same vein, he hasn’t exactly been forthcoming on whether or not he’ll be given a new contract or any more time on the pitch than he’s currently getting. It’s believed that the German will be recruiting heavily this summer which means that some players will have to make way and the Welshman could be an unfortunate victim of circumstance.