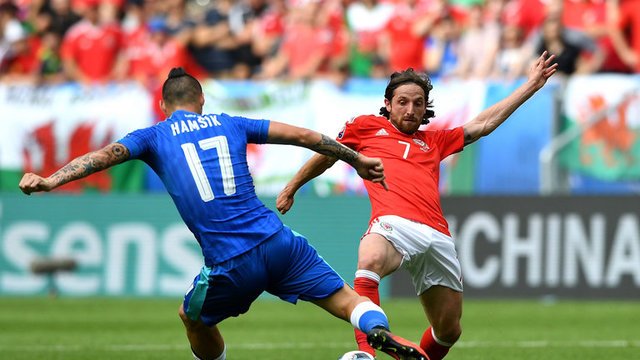 With the European Championships over, Wales midfielder Joe Allen is enjoying a much deserved holiday after the Dragons defied the odds to reach the latter stages of the competition. Having missed Liverpool’s wins over Tranmere Rovers and Fleetwood Town, the 26-year old is expected to report back to Melwood for pre-season training before the Reds tour of North America gets underway later this month, but he’ll be back on Merseyside for more than just that with contract talks with the club set to go down.

With only a year left on his deal, the Welsh international has admitted on more than one occasions that he’s not quite sure where he stands. Impressive displays in France — including being named in the UEFA”s Team of the Tournament — have raised his stakes significantly, though it’s still uncertain whether the club will look to offer him a new deal.

“We will find a solution but it’s not done,” said Liverpool boss Jurgen Klopp after watching his side run out winners against Fleetwood Town on Wednesday night.”Obviously Joe Allen is a good player. We never doubted this. He played a good European Championship, like the whole Welsh team,” continued the German, keeping his cards close to his chest. “We have to make decisions, we have to find solutions,” he added. “We have to talk to the player, ask the player and think about our situation. That’s how it works.”

Allen, for his part, has been attracting attention and his contract situation will be closely monitored by both teams at home and abroad. Swansea City, who sold the 26-year old to the Reds after then manager Brendan Rodgers upped stakes and moved to Anfield, have expressed an interest in bringing him back to the Liberty Stadium and Spanish side Sevilla have also admitted that they’ve identified him as a player of real interest. Should he not be handed a new deal, at least he won’t be short of options…