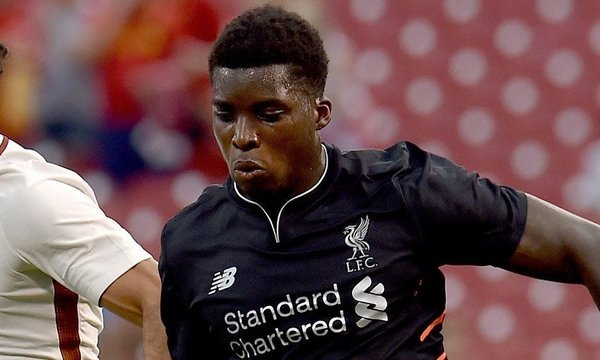 Since linking up with Liverpool following a stint with the England U-19 squad, Reds attacker Sheyi Ojo built on his impressive performances with the national side by bagging a goal in the 2-1 loss to Italian side AS Roma on Monday night as the Anfield outfit capped off their pre-season tour of the United States.

“It was disappointing to lose the game but there are a lot of positives to take from the game and our time out here,” the youngster told the club’s official website. “It was very tough, very humid and the pitch wasn’t the best – but that’s not an excuse. We will assess the game and look forward to the next one,” added Ojo, looking ahead to the meeting with Spanish giants Barcelona on Saturday. “It would be nice to play against a team like that but for me I’ve just to keep my head down and keep working hard in training and see what happens. The most important thing is the team and everyone got fitter and we are getting stronger and looking forward to the new season.”

With a trip to Arsenal on opening day just around the corner, Liverpool manager Jurgen Klopp will be looking to nail down his squad for the campaign in the next couple of weeks. While there could still be some incoming players in what has been a busy summer on Merseyside, there’ll almost certainly be more players making their way through the door — whether on loan, or on a more permanent basis.

“I don’t know. We will have to see,” said the Reds boss when asked if he was considering sending the 19-year old out on loan. “Sheyi is a wonderful player that’s for sure and his future is 100 per cent at Liverpool. We don’t have to make decisions so early,” mused Klopp, obviously still weighing up his options. “We have time and we have to use the time. We have had some injuries. We need to make the boys as fit as possible.”