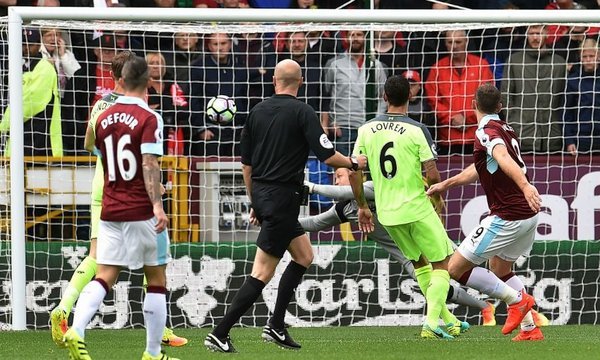 The Jekyll and Hyde references are out in full force again after Liverpool followed up an exciting opening day win over Arsenal at the Emirates Stadium with a disappointing display against newly promoted Burnley FC at Turf Moor as the Clarets bagged their first win over the Reds since the Seventies.

It took the hosts only 138-seconds to open the scoring when an error from Nathaniel Clyne lead to Sam Vokes smashing in a spectacular effort from distance. Andre Gray, who is now embroiled in a scandal over homophobic tweets, added a second when a well worked piece of counter-attacking football earned him his first Premier League goal and handed Sean Dyche’s side a vital three-points in their quest to secure their top flight status.

Maybe it’s a bit too early to chat about relegation, but Burnley struggled to hang on in these kind of situations two years ago as they dropped straight back down to the Championship. While there’ll be a lot of smiling faces in Burnley, there’ll just as many exasperated ones on Merseyside — including Liverpool boss Jurgen Klopp.

“We lost in a game in which we had in both halves about 80 per cent possession. But there are different ways to play football, that’s absolutely OK,” explained the German manager in his post match interview. “I respect this but usually in a game like this, we win, if we don’t make mistakes in the wrong moment. But we did,” conceded Klopp, knowing full well that this isn’t the kind of conversation he should be having. “Now we have to accept the result and carry on.”

It’s not how much of the ball you have, it’s what you do with it that matters.

Despite only having 19% possession, the Clarets more than eeked out the win, defending in numbers and prioritising defensive stability and shape above all else. Liverpool, on the other hand, are still having massive problems breaking down teams that are more than content to let them dictate the tempo and wait patiently for their chances. Keeping their visitors to mainly long-range efforts, Burnley ‘keeper Tom Heaton was rarely troubled as the Reds were restricted to mostly long-range efforts. That, of course, could have been dangerous had Philippe Coutinho, who found space on more than one occasion, brought hos shooting boots, but the Brazilian was clearly off the pace on what was a frustrating day for all involved.

That Dyche’s side had only one other shot throughout the 90-minutes is telling, but the expectation was always that they’d try to contain while the Reds attacked — which is exactly what happened, but it turned out a result that few would have predicted. Not only that, it puts a serious dent in the early season optimism generated by the win over the Gunners.

With all of that being said, it’s still early doors and there are kinks to work out — Klopp, who is no idiot, has admitted as much and there’s no reason to doubt that they’re being analysed thoroughly. Clearly this isn’t the kind of result that gets you a top four finish, but I’m not thinking about the end of May quite yet. By my estimation, there’s still a ways to go…