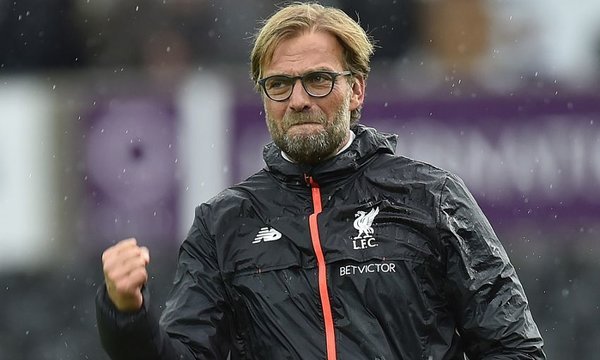 With Liverpool boss Jurgen Klopp’s one year anniversary on Merseyside coming up this weekend, Reds fans may be celebrating the German’s arrival after an uptick in their fortunes saw the Anfield outfit go in to the second international break of the season in a Champions League spot, but the man himself isn’t in the mood for festivities.

“I have no time,” said Klopp when asked to reflect on the past year. “And I am not in the mood for reflection, to be honest. It’s a year, I’m a year older and all this sh–, but everything else is good. Not perfect, but in a good way. That’s what we hoped, that’s what we said,” mused the charismatic manager. “After one year standing here, we can talk like this. There was doubt, there was a lot of rumour around me. People said ‘obviously he was a good coach at Dortmund but a German managing here doesn’t work’ things like this. That’s better now.”

Leading the club to two cup finals after taking over for now Celtic supremo Brendan Rodgers last fall, the 49-year old has had an immediate impact at Liverpool and is already being touted as the next great Reds manager. Although the supporters may be getting slightly ahead of themselves, Klopp has always stayed far more pragmatic — and after a year in charge, that hasn’t changed one bit. Short-term success is nice, but former Borussia Dortmund man has a different idea.

“The thing is, I’m not here for a year, I’m here hopefully for the long-term, and it means that we have to use all the information we have until now and learn from it,” continued the Liverpool boss. “That’s how life works, collecting experience, learning from it and being ready for the next challenge,” added Klopp, ever the philosopher. “My year is what, the 8th of October, yes? We will not celebrate, I can tell you that! Hopefully nobody brings me a cake!”