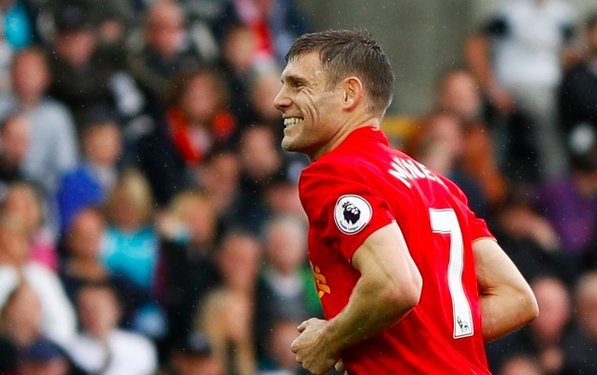 Quietly shutting down his many critics with some seriously impressive displays, Liverpool utility man James Milner looks like he’s making the left fullback position his own this season with a number of outstanding displays in the still unfamiliar role. With a meeting with Manchester United looming just over the horizon, the 30-year old will have plenty of time to work on it though having retired from England duty following their exit from Euro-2016 at the hands of Iceland.

“To concentrate on Liverpool is obviously the big thing for me now,” he told the Liverpool ECHO. “It means I will feel pretty fresh going into the next round of fixtures after the international break. I had done it for a lot of years, going away with the national team and coming back,” explained Milner. “Sometimes it was quite tough when you had been travelling, had a couple of days and were back into the fixtures,” added the veteran midfielder. “You don’t really get that break. For me personally and hopefully Liverpool, it can be a positive thing that you do feel fresher after the internationals.”

With four strikes from the spot as the Reds won four Premier League outings on the hop, the former Manchester City man will be looking to add another three-points when United visit Anfield later in the month, but the key to that may be keeping things tight at the back. Yet to keep a clean-sheet this season, the Reds defensive remains a major talking point even though they’ve been improving as of late. Milner, who is keeping recognized fullback Alberto Moreno out of the squad, is admittedly still adapting to playing further back on the pitch, but according to Nathaniel Clyne, you wouldn’t know it.

“He seems to make it look easy!” said the England man, feigning annoyance. “I’ve trained my whole career to be a fullback and he comes in and makes it look easy. He’s enjoying, and also getting on the score sheet,” said Clyne, full of praise for his compatriot. “He’s very professional—every team needs a James Milner in their side, who can play any position.”