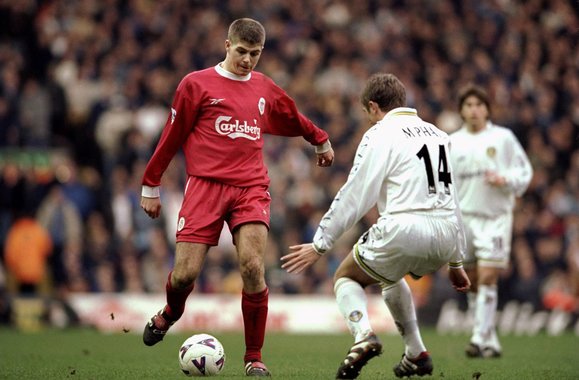 I suppose I could trot out the cliches and give you a trip down memory lane, but Steven Gerrard deserves better than that, doesn’t he? After clocking up over 700-appearances for Liverpool and claiming nine trophies during his time at Anfield, the man who truly encompasses the word “legend” can’t be eulogized with your run of the mill retirement retrospective.

In the age of social media, talk is cheap. When we’re proclaiming players to be heroes and saviors every other weekend, those terms start to lose their meanings and become just another part of the hyperbolic culture built up around modern football. Over the top plaudits should always be taken with a healthy dose of skepticism, but there’s little to be found when it comes to a player of Gerrard’s caliber. He was never perfect and never pretended to be, but as a true colossus of the game, the Whiston born midfielder was more than just another millionaire kicking a ball around a field week in and week out.

It’s nearly impossible not to tread in to well worn territory when you talk about him; whether it’s Gérard Houllier handing him the captain’s armband, the historic treble, that topsy-turvy night in Istanbul or the “Gerrard Final” that’d follow, there’s no lack of narratives. A dramatic U-turn when on the brink of joining Chelsea, the disappointment of the 2007 Champions League final, the infamous slip en-route to what looked certain to be Liverpool’s first title of the Premier League era and his move to Major League Soccer side LA Galaxy are all fair play, but there’s no one event that can better frame a player of this magnitude more than his first senior appearance for the club and the mix of pride, awe and nerves that were on his face as he replaced Vegard Heggem in the dying minutes of a 2-0 win over Blackburn Rovers at Anfield.

“The world,” said the former skipper when asked what playing for Liverpool meant to him. “I started supporting the club at a very young age, a lot of my family are Reds,” explained Gerrard, speaking to England alum Gary Lineker when he announced he’d be hanging up his boots. “The way the club shaped me and treated me from a young age and turned me into a decent human being and a good footballer, I have a lot to thank them for.”

Those aren’t the words of a just another player throwing out a soundbite for the media — something for the headline writers to scrawl down and the talking heads to analyze endlessly. Talk, as I already said, is cheap, but after spending 17-years with the club he grew up supporting, the weight of his words and the sentiment behind them could never be in question.

There’s so much more to say, but in a small way, all that matters is that where he began is where he ended; going from standing on the Kop to not only playing in front of it, but becoming arguably the greatest player in the club’s already rich history. While his immediate future isn’t certain, we know this isn’t the end of Steven Gerrard and Liverpool.