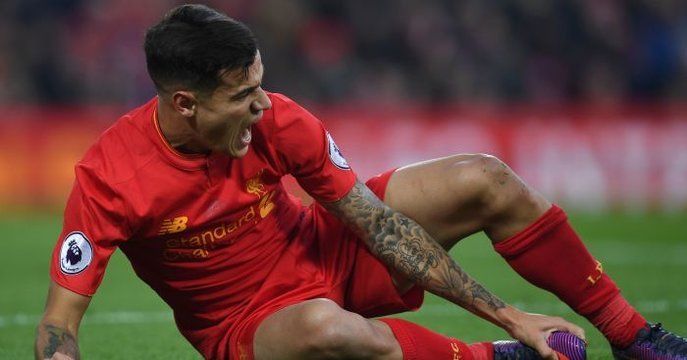 Although some were fearing that his season may be over after he was stretchered off midway through the first half of Liverpool’s 2-0 win over Sunderland on Saturday, scans at Spire Hospital in Mossley Hill on the ankle of Reds attacker Philippe Coutinho have supposedly suggested that there is damage to the ligament, but the early prognosis is that he’ll be sidelined for somewhere around six weeks and will not require surgery.

This timeline, of course, isn’t an official confirmation from the club with Liverpool boss Jurgen Klopp having addressed the press ahead of the League Cup quarter-final meeting with Leeds United prior to the Brazilian’s trip to the hospital.

“Obviously you know about Phil – his scan is this afternoon and we will then know more,” said the Reds manager earlier in the day. “What I can say is it is for sure too long because the best thing would be that he is not out, but that’s not really likely,” explained the German, trying to put on optimistic shine on a all around bad situation. “We have to wait for a final scan and then we’ll know how long it will be and then we have to take it like it is.”

Even if it is only six weeks that Coutinho is sidelined, there’s a lot of football to play over the next month and a half with the busy Festive Fixture period just around the corner — potentially ruling him out of trips to AFC Bournemouth, Middlesbrough, Everton, and Sunderland as well as home matches against West Ham United, Stoke City and Manchester City. It’s never easy to keep pace at the top of the table and having the Brazilian sidelined until January isn’t going to help one bit.