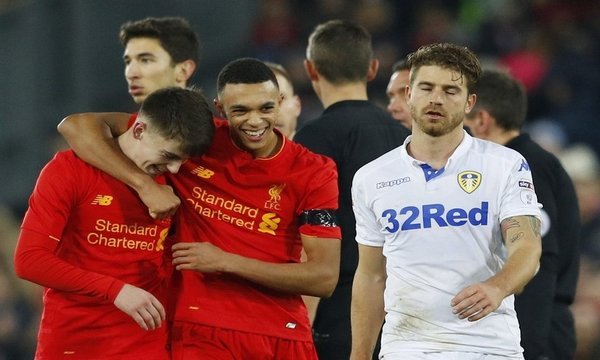 It is always a great moment seeing a young lad from the academy make his first senior appearance, which is what Ben Woodburn accomplished on the weekend at Anfield against Sunderland in the Premier League, albeit for only two minutes. But when Liverpool manager Jürgen Klopp summoned the 17-year-old from the bench in yesterday evenings EFL Cup quarter-final tie at home to Leeds United, it was a real chance for the fans to see what the highly thought of youngster could produce. Just days after his Reds debut, the under-19s Welsh International fired in his first senior goal to send Liverpool into the semi-finals of the EFL Cup, sending his manager, team-mates and Liverpool supporters into complete bliss.

Prior to the new Millennium, Liverpool’s academy had been considered one of the best in the world. With the likes of Steven Gerrard, Jamie Carragher, Steve McManaman, Michael Owen & Robbie Fowler, being developed, players that have gone on to be some of the best in the game. However, In recent years, that world class title has not lived up to its full expectations by failing to produce players of the calibre of Gerrard, Carragher, McManaman, Owen & Fowler. The last notable set of academy youngsters who made an impression at Anfield did not quite fill up to the expectation we might have first anticipated. The past six years had seen the breakthrough of Jay Spearing, Jack Robinson, Martin Kelly, Jordan Rossiter, Jordan Ibe, Raheem Sterling & Jon Flanagan. All of whom have left the club, with the exception of Jon Flanagan who is currently out on loan at Burnley.

From the sales of these academy players, Liverpool have generated £82 Million of income, however, £75 Million coming from the sale of Sterling and Ibe alone. There is a sense that the Reds could be about to produce some real potential stars, none other than our new youngest ever goal scorer.

Following Woodburn’s first Liverpool goal, Jamie Carragher was the first of many to plaudit the 17-year-old and his fellow academy team-mate and Man of the Match, Trent Alexander-Arnold, and also the academy staff at Melwood. Carragher spoke out how making an early impact is key for young strikers, “I always think people like Michael (Owen) and people like Robbie Fowler, strikers who went on to have fantastic careers at Liverpool, always made an impact early on.” The former Reds defender also spoke highly of Alexander-Arnold calling him “ample back-up for Nathanial Clyne,

“I think we now know why Jürgen Klopp went in with only one recognised right-back this season. His performance tonight, and again against Spurs, I think we know now. Sometimes you just look at a younger player and they look like an athlete. It’s perfect for the full-back position, and you think he’s 18 now, imagine what he’ll be like in four years’ time.”

The Sky Sports pundit also praised the academy staff in the development of the youngsters, but assures that it is the effort put in by the players that is the key,

“It’s massive credit to Jürgen Klopp, and the academy staff in Alex Inglethorpe, Steve Heighway, but never ever forget it’s still the player who has got to do it on the pitch. He’s played twice and has been outstanding.”

After seeing only glimpses of only a few of Liverpool’s youngsters, could we be seeing a new era and influx of academy players who could very well go on to be key first team players in the near future. Certainly, the performances of Alexander-Arnold, Woodburn and Ovie Ejaria, who also started last night, is a promising sign that the Liverpool academy is on the rise again of being one of the best in world football.