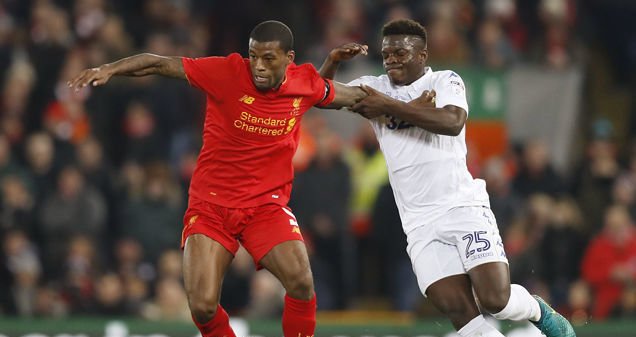 Building on an unbeaten streak that stretches all the way back to August, Liverpool set up a two-legged League Cup semi-final with Southampton in the New Year with a comprehensive 2-0 win over Leeds United at Anfield on Tuesday night. One step closer to claiming redemption for their loss to Manchester City in the last season’s finale, Jurgen Klopp’s side are in an unprecedented run of form — something they’ll look to keep up when they visit AFC Bournemouth at the weekend.

“Until now everything is going well, we’re winning games, playing well,” Liverpool midfielder Georginio Wijnaldum told the club’s official website. “I’m still waiting on the goals! Today I was unlucky, I hit the post and it was a great save by the ’keeper, but it’s a great time to be here because you play with good players and for a good manager and that makes you a good player,” said the Dutchman, reflecting on the win over Leeds earlier in the week. “So it’s happy times in Liverpool.”

Wijnaldum has played a key role in the Reds midfield since arriving from Newcastle United in a £25mil move during what was a busy summer at Anfield. On Tuesday he was allowed to push further forward than usual by Liverpool manager Jurgen Klopp to compensate for loss of Philippe Coutinho with some suggesting that this could be a preview of what his role may look like with the Brazilian sidelined for the next six weeks. That, of course, gives the Dutchman big shoes to fill, but as long as the team keeps winning and competing for silverware, he’s going to keep that trademark smile on his face.

“It’s always good to win the game and go to the next round. It was a really difficult game; the first half we didn’t create a lot of chances but in the second half we scored the goals so it was good,” continued Wijnaldum. “I think we did well in the second half. We conceded a few chances to them – they hit the post, that was their biggest chance, but at the other end we scored two goals and go to the next round,” added the 26-year old. “It’s not always easy in a difficult game, but we still did it so that’s good.”