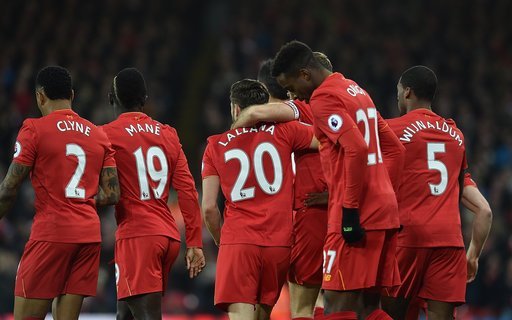 Christ almighty, do I need to stop saying Liverpool are going to find it comfortable defeating upcoming opposition? Yes. but I will not.

Since I said this…

… Liverpool have not won a game!

Liverpool take on Middlesbrough this Wednesday as they look to get back to winning form – after throwing away a 3-1 lead against Bournemouth and drawing 2-2 with West Ham at Anfield.

We’re meant to be challenging for the title, right? Yes and no – but one point from two games against clubs we are better than just isn’t excusable. It’s laughable.

Although, I do believe some of our fans have gotten ahead of themselves.

@Red_AhmadNasr I think lots of our fans bought into the idea we will challenge for the title. Eh, I'd be thrilled with top four this season.

Can we really expect miracles? YES. ABSOLUTELY. But let’s lay off the lads when we lose our first game in over three months, eh?

That being said, it’s been seven years since Liverpool took on Middlesbrough – and DO YOU REMEMBER THAT GAME? I DO. We lost 2-0, a blip, in a run that would see us finish four points behind Champions Manchester United.

I honestly hope we maul Boro; I’m talking about a six or seven nil scoreline… Ha. Who am I kidding? They’ll at least get one. 7-1 it is.

Speaking more optimistically, to find the last time (before that ??) Liverpool fell victim to a defeat at the hands of Boro, you have to go back to 2004 to see us lose 2-0 at the Riverside.

It’s, again, important that Liverpool get a win in on Wednesday night; they’re up against Everton in their following Premier League fixture – making The Ev’s 2-1 win against Arsenal twice at important. The Gunners scuppered at Goodison and Jurgen Klopp’s men need to take advantage to keep up in the title race.

It’s difficult to see where Chelsea may drop points in their run of games before New Year but we can’t let them get away; even if we win against Boro, Antonio Conte’s men have the chance to go six points clear at the top of the table, just two weeks before Christmas.

The return of Matip against West Ham offered Klopp some defensive sturdiness and seeing Adam Lallana and Mane back on the team sheet too was a breath of fresh air.

All three are available for Liverpool but star men Philippe Coutinho and Daniel Sturridge are still unavailable, but there are reports that Phil is aiming to return for Liverpool against Manchester City on NYE.

Dejan Lovren picked up an injury during Liverpool’s last outing, being substituted off for Ragnar Klavan against West Ham at Anfield.

Considering that, I’d suggest that Liverpool will start with the duo of Matip and Klavan ahead of Karius, between the sticks, considering Klopp’s faith in the young German.

It may have just been me but I thought Jimmy Milner was woeful in our last match and, as such, I think Alberto Moreno will be handed a chance against Boro.

I only really think this because, as it’s a midweek game, and we play in the Merseyside Derby on Monday, Klopp can say he’s resting soon-to-be-31-year-old Milner.

Boro are one of the luckiest teams this season, when it’s down to injuries, so far; they’ve only got three players currently injured and two of those are in line to make their return against Liverpool.

One player that will definitely miss the game is Uruguayan play-maker Gaston Ramirez, he’s currently being treated for a foot injury.

The other two players, facing a late fitness test are Alvaro Negredo and George Friend – I’d never wish ill health upon anyone but I do hope they’re not 100% just yet.

Liverpool will win – simple as. We’ve had a bit of a rocky couple of games but we’ve now got our spine back in the team and we’re playing a team that are in touching distance of the relegation zone.

We may have had problems seeing out victories over the last fortnight, but, in that time, we’ve scored five goals; on average, it would take Boro three times the amount of games we’ve played to score one more goal than us there.

Klopp’s Liverpool, we are a goal-scoring machine. We’re going to step out at the Riverside and dominate Boro in their own back yard.

If Negredo starts, they’ll give us trouble – to be fair, a Sunday league side could give us defensive problems if they had a player over six foot.

For the third game on the bounce, I’m going to tip Liverpool to win in a goalfest – I think Liverpool will steamroll Boro 5-2 in their own back yard. They’re due a hammering.

If you’d like to strongly disagree with me or remind me of what I’ve written, after the ghost of Xabi Alonso lobs Karius from 60 yards, you can find me on Twitter – @StefanoHairon... ten points for anyone who gets that joke.