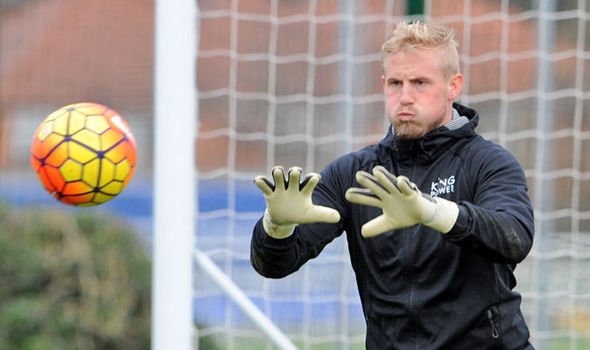 Although Liverpool ‘keeper Simon Mignolet is expected to be given an extended run in the side after keeping a clean-sheet in back to back matches, rumour has it that Reds boss Jurgen Klopp is going to go back to the drawing board in an attempt to solve his side’s problems between the sticks and he’s tacked a big picture of Leicester City shot-stopper Kasper Schmeichel up on it.

The Foxes goalie, the son of legendary Manchester United man Peter Schmeichel, has been a commanding presence for the reigning Premier League champions since moving to the King Power Stadium from Leeds United under the watchful eye of former England manager Sven-Göran Eriksson. Regarded as one of the finest shot-stoppers in England, he’s attracted the attentions of a number of different clubs, but a new contract with Leicester over the summer quieted the chatter of him moving on to a “bigger” club — until now, of course.

While it’s probably just transfer window tat, it wouldn’t be too hard to envision a world where Liverpool made a serious move for an experienced ‘keeper like Schmeichl who’s strong in the air, good at organizing the players in front of him and a monster at set-pieces. Loris Karius, who was dropped after a string of errors saw the Reds lose to AFC Bournemouth and draw with West Ham United, may still be the long term answer to the question, but as the Anfield outfit slugs it out with Chelsea at the top of the table, Klopp doesn’t have time for the student to become a master.

With all that being said, after putting pen to paper on a new five year contract back in August, it’s unlikely that a move would materialize next month unless they’re willing to part with serious money for the Dane. Of course, there’s also the small matter of whether or not he’d be interested in making the move — and with the Foxes through to the knockout rounds of the Champions League, that could very well be unlikely.