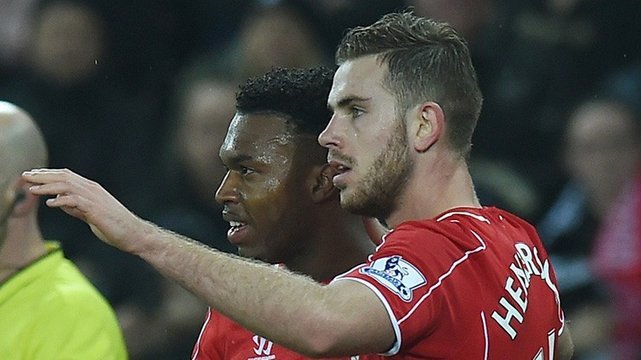 A calf injury kept Liverpool striker Daniel Sturridge sidelined for the club’s last five matches, but a cameo appearance against Everton on Monday night lead to Sadio Mane grabbing a late winner after a run and gun effort that smacked off the post lead to the Senegalese attacker bundling home to send the traveling Kop in to hysterics.

“It’s massive,” said Reds skipper Jordan Henderson when asked about Sturridge returning in time for the holiday fixtures. “Both him and Emre [Can] coming on [against Everton] – two brilliant players coming back from injury – shows the squad depth. I thought they were brilliant when they came on,” enthused the Liverpool man. “I am sure the Everton players looking at those two coming on wouldn’t have enjoyed that last 15 minutes. They wouldn’t have liked seeing those two come on,” added the captain. “Daniel came up with a bit of magic for the goal and he is a huge player for us.”

Injured or marginalized for much of the season, there’s been rumours that Sturridge will look to move on when the transfer window reopens next month, but Reds boss Jurgen Klopp has insisted over and over again that the 27-year old remains a big part of his plans for the Anfield outfit. With a packed calendar on the horizon — including their first FA Cup outing of the season and a two-legged League Cup semi-final with Southampton coming up in January — it’s highly unlikely that he’s going anywhere.

“It was very important,” said Klopp when asked being able to call on both Emre Can and Daniel Sturridge from the bench against Everton. “Daniel trained only two times, so we were really waiting for the moment when we could use him. The game was for him at the end. Twice training is not the biggest intensity,” explained the German manager. “It’s very important they are back. We need these options to change to do some things in and around a game. It’s good.”