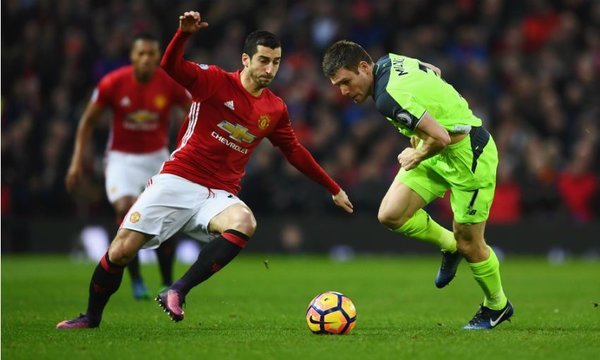 It’s hard to complain too much about snagging at point at Old Trafford, but with Liverpool looking likely to put one over on Manchester United as the clock dragged towards the 90-minute mark, the disappointment was palpable as Zlatan Ibrahimovic’s late equalizer turned pure joy in to something far more mundane.

That the goal never should have been allowed due to United fullback Antonio Valencia being offside during the build-up only adds salt to the wound, but with the five point gap between the Reds and their bitter rivals maintained, we can move on and forward without having to glance far enough down the table to spot Jose Mourinho’s side — this, it has to be said, was hardly the season defining showdown that the media might was flogging pre-match.

You can only beat the team that’s put in front of you, but for all of the hulabaloo surrounding United’s now sixteen match unbeaten run, the hosts looked quite ordinary for long stretches with only Henrikh Mkhitaryan looking keen to cause any problems. Liverpool, to be fair, weren’t exactly lighting things up from the off, but they took a deserved lead when Paul Pogba made a hash of a corner and somehow handled the ball while trying to get the best of Dejan Lovren. James Milner, as reliable as the days of the week, buried the resulting spot-kick past Red Devils ‘keeper David De Gea. While the Spaniard spent the rest of the first half untroubled, his counter-part in Simon Mignolet was made to work for his crust, keeping a powerful Ibrahimovic free-kick from finding the back of the net and doing just enough to put Mkhitaryan off as he burst in to the area.

The introduction of Wayne Rooney at the break gave the headline writers some ideas as the former Everton man continues his quest to break Sir Bobby Charlton’s goalscoring record, but it was Liverpool talisman Philippe Coutinho that would make the big difference as Jurgen Klopp’s side got a foothold in the second half with the Brazilian taking charge of proceedings. Chances for Adam Lallana and Roberto Firmino would follow as the intensity ratcheted up in the second half, but their lack of a cutting edge up top — a phrase you never would have uttered prior to the New Year — would be what ended up costing them the points.

That, unfortunately, was the difference; Ibrahimovic, taking full of advantage of some vintage Mourinho “hoof and hope” football was able to grab yet another offside goal for the Reds Devils while Georginio Wijnaldum, finding himself on the precipice of glory, could only shoot tamely at De Gea after being found unmarked in the box.

“I didn’t see the games until now,” said Liverpool boss Jurgen Klopp when asked about the league table and his side slipping to third. “I think we are in the region of the table where we have to be. In this moment, maybe for us it’s a little bit more difficult to play our best because not everybody is available and all that stuff, but everybody could see we will fight for it 100 per cent,” explained the German manager. “For today, the performance was absolutely more than OK. It is not usual that a team, like my team did today, do it in this situation after the game in midweek and all that stuff. I am fine with it and now we have to carry on.”

Without the likes of Joel Matip, who was taken out of consideration after FIFA failed to respond to a query as to his availability, and Nathaniel Clyne, who aggravated an already sore rib cage in training, out of the side we did exceptionally well at the back and considering that it was 18-year old Trent Alexander-Arnold that was drafted in to replace the highly experienced fullback, it’s even harder to look back on this one too harshly. Still, it’s United at Old Trafford and not only a blown lead, but a stumble in the title race — that hurts, of course, but season defining? Hardly.