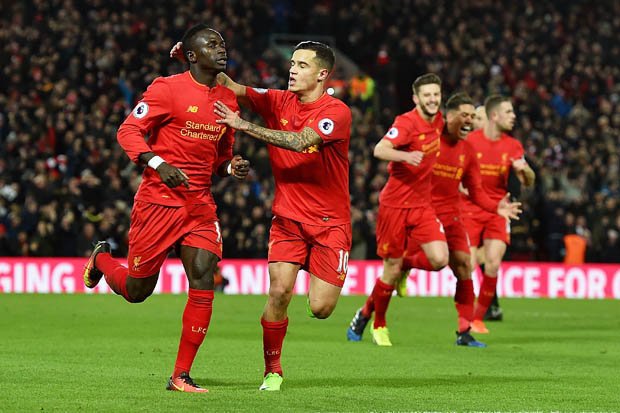 Liverpool have been in the doldrums since the turn of the year but they produced the performance of the season to obliterate Tottenham at the weekend.

In the build-up to the game all the talk was about Spurs being the form team of the league and apparently the best the Reds could hope for was a draw, but Jurgen Klopp’s men made a mockery of that.

It finished 2-0 but it easily could, and perhaps should, have been more, such was Liverpool’s utter dominance. How Reds fans will wish they could have played with this level of intensity since New Year. After posting the best first half of a Premiership season of any Liverpool team in history, things started to unravel in 2017. Before kick-off on Saturday, they had not won once this year, losing to Hull, Southampton (twice), Wolves and Swansea along a run of 10 games without victory.

Spurs meanwhile went into the game full of confidence, having remained unbeaten since early December and lying second in the table. But Liverpool totally and utterly beat Tottenham at their own game.

The Reds pressed them high up the pitch and hassled and harried Spurs so badly that they were guilty of all sorts of errors in possession. It is the brand of football that has served Tottenham so well under Mauricio Pocchetino, but Klopp has long been an expert advocate of such heavy metal football.

It is no coincidence that Liverpool’s poor run occurred at a time when they were stripped of the services of dynamic attack Sadio Mane, who was at the African Cup of Nations. They sorely missed his pace, movement and directness up front, while he is also one of the best in the business as closing down defenders, so his return is a huge boost for the side. He put Spurs to the sword with two expertly taken goals and ultimately he was the difference between drawing and gaining those vital three points.

Mane was unplayable, but to a man Liverpool were great: Simon Mignolet made an excellent save at 1-0, the back four was dogged, Lucas and Jordan Henderson were titans in the middle of the park, and Roberto Firmino, Philippe Coutinho and Adam Lallana were full of energy and invention as they buzzed around Mane. The return of the often magical Coutinho is another huge boost.
Liverpool fans can now look towards the end of the season with renewed optimism. They are devastatingly out of all cup competitions and will struggle to make up an 11-point gap on Chelsea in the Premiership, so the real prize now is reaching the top four and ending up back at Europe’s top table for 2017-18, giving Klopp the financial clout and the competitive lure to attract some of Europe’s top players.

They are up to fourth, just a point behind Spurs and Arsenal, who are second and third respectively. It is so tight though as they are ahead of Man City (who have a game in hand) in fifth by goal difference alone and are also just a point clear of Man Utd in sixth. But now they can kick on: a pinnacle review of the odds shows that Liverpool are heavy favourites to win their next two league games, against struggling Leicester and at home to an erratic Arsenal side that Liverpool have already beaten this season. Get through that period with six points and the end is in sight.

The bookmakers think they can do it, after that Spurs win. Chelsea are naturally 1/500 favourites, and then come Man City on 2/7, Tottenham on 4/9 and Liverpool on 8/11. Liverpool are odds-on now to finish in the top four and the bookies expect it to come at the expense of Arsenal (10/11) and Man Utd (6/5). If they carry on playing like they did against Spurs, it is a formality, and fans can only hope they maintain that intensity as it would please them no end to deny Man Utd a Champions League spot