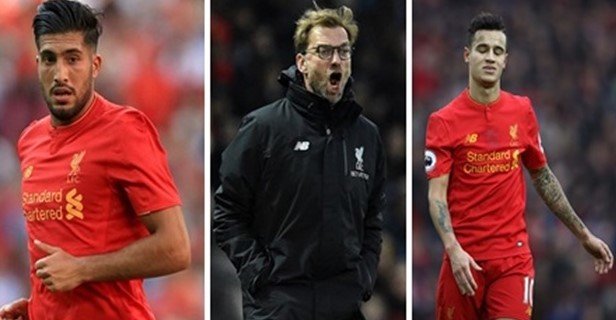 Four days on from Liverpool’s abysmal display away to reining league champions and current relegation battling Leicester City at the King Power stadium, and I still can’t shake it off. That defeat now leaves the Reds 1-point outside of the top 4 having played a game more than the two Manchester clubs and the Reds next opponents, Arsenal.

In case you need reminding, Liverpool were defeated 3-1 away to a struggling Leicester City who, just days prior to the Monday night fixture, sacked Claudio Ranieri for their poor run of form, having slipped into a relegation battle. A brace from Jamie Vardy and a, what has to be said, worldie from Danny Drinkwater, secured the Foxes first league win and first goals of 2017. Liverpool face Arsene Wengers Arsenal at Anfield on Saturday evening hoping to secure a win to keep Klopp’s Reds still within reach of Champions League qualification.

Following the defeat on Monday night, questions need to be raised on the performances of Jürgen Klopp and his players of late. During Klopp’s post-match interview, the German said, “It’s getting more serious now. We all play for our future, myself included. We get judged every day, especially on match days.”

There is no question that the current squad has bags of talent, but that talent is not being displayed like it was in the reverse fixture against Leicester where we ran out 4-1 victors. Following the electric performance, the ‘Heavy Metal’ football we have come to expect from this Liverpool side, against an in-form Tottenham, Klopp and his team travelled to La Manga for warm weather training, and looking to kick-on for the remainder of the campaign.

Where do we go from here?

After returning from La Manga, there was no doubt that we were all eagerly anticipating the type of form that we had come so familiar with in the first half of the season, but to be let down by a lack of passion & fight throughout the team at the King Power. Despite the talent through the squad, time and again do particular players lack that passion. Though it is difficult to criticise him, Philippe Coutinho is one that lacks the fight. Despite scoring on Monday night, the 24-year-old, since his return from injury in the new year, has failed to deliver. A player that when playing well, can make everyone else play on another level. However, our little magician just keeps going missing in games all too often, and it is now at a point were questions need to be asked of him of his capability to produce on a consistent basis. Hopefully we will be proven wrong on Saturday and he can show why he is our best player.

Liverpool have not been the most fortunate with injuries this season and with the absence of captain Jordan Henderson on Monday night and potentially for the Saturday clash against the Gunners, Klopp has had to call upon fellow country-man Emre Can to fill the boots. With Klopp warning his players that they are ‘playing for their futures’ at Anfield, the 23-year-old is certainly one who needs to step up a level. Despite his clear physical ability, he looks a yard off the pace, especially when compared to his fellow team-mates in Gini Wijnaldum and Henderson.

Liverpool legend and Sky Sports pundit has expressed his views on Liverpool’s quality and lack of aggression within the squad,

“Liverpool need to spend big in the summer and replace the spine of the team, which is a top goalkeeper, a top defender, a central midfielder with some bite and a quality striker.”

Klopp has been rumoured to have started discussions with Daniel Sturridge over his future under the German, who could be set to leave Anfield in the summer transfer window, and Thompson is urging the club to spend big should the 27-year-old depart;

“I think since Klopp has been there we’ve been in profit for transfers so there should be some money in the kitty.”

“Raheem Sterling is the main one who has been sold and we’ve got a lot of players off the wage bill. If Daniel Sturridge leaves in the summer, which looks the case if he isn’t playing, it wouldn’t be a massive sum but we’ve got to spend big on a replacement.”

The question is though, if the Reds fail to get Champions League qualification, would Klopp alone be enough to bring in the top-quality players we need to push on to the next level?

One thing that I could not agree more with the former Liverpool captain is that, we are crying out for someone with “a bit of attitude and aggression […] a Graeme Souness or, dare I say it, a Roy Keane.” When Emre Can was brought in by Brendan Rodgers, I thought, Yes! This is what we need. A hard-man in the midfield who can boss a game for 90-minutes, protecting the centre-backs. Of late, that is what we have missed, particularly when Henderson has been unavailable.

Liverpool have reportedly been linked with a summer move for RB Leipzig central midfielder Naby Keita who can be compared to Chelsea’s N’Golo Kante on a defensive level.

Could Naby Keita be the missing piece of the puzzle? I for one would be delighted should we sign the Guinean international, and believe that he is the type of player that this Liverpool team needs, that someone with a bit of ‘bite’.