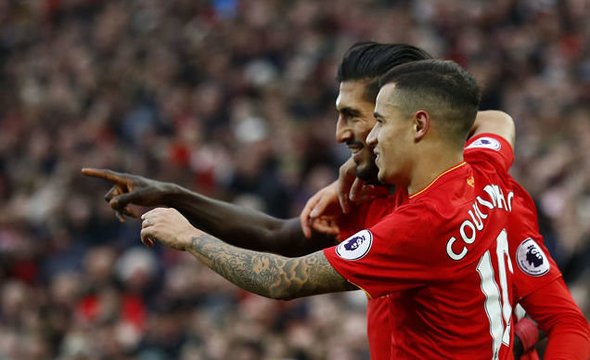 Coming off a disappointing Champions League exit at the hands of French pace-setters Monaco, Manchester City will be looking to put what has been a bad week to bed when Liverpool visit the Etihad Stadium on Sunday. The Reds won their meeting back in December courtesy of a Georginio Wijnaldum header, but if they’re going to do the double over Pep Guardiola’s side, they may need the services of a certain Brazilian.

“The one worry for me is Philippe Coutinho at the moment. The man was on fire earlier in the season, he was the difference,” said former Liverpool skipper Jamie Redknapp. “But some of the magic has gone and he needs to try and get that back. That’s the manager’s job this week,” explained the player turned pundit. “Especially at Man City where he’s had a lot of success in the last two or three seasons. That’s a bit of a worry for me because he makes such a difference,” added Redknapp. “When he plays well, so do Liverpool.”

Right alongside Coutinho, Liverpool midfielder Emre Can has suffered a bit of an indifferent start to the New Year with a series of patchy performances blighting his record. While the German was on point to bag the winner against Burnley FC on the weekend, suggestions that an ongoing contract dispute with the club are hampering his game continue to gain traction. Can expected to retain his spot in the starting line-up with skipper Jordan Henderson still sidelined with a foot problem, but as he enters the final year of his current deal, there are those that doubt whether or not he’s at Anfield for the long haul.

“Can’s big problem is that I don’t think he’s a versatile player but he’s played in four or five positions for Liverpool,” explained Reds legend Jamie Carragher. “The only position I think he can play is the one he played [against Burnley], the sitting midfielder, because he needs legs around him. [Klopp] is playing Jordan Henderson ahead of him,” continued the Sky Sports analyst. “Now, he’s got a contract situation at the moment, [Can]. Is he going to sign it? Is he not? I think he may have 12 months at the end of the season,” mused the ex-defender. “So there is a good chance he may not be here next season. I don’t see, when the first XI is picked, where else he can play except that role. That role is for the captain Jordan Henderson, who I can see how much he is missed in the last three or four games he’s been out.”