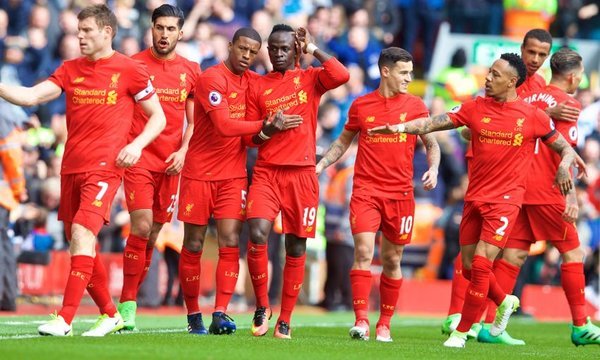 Everton’s mission to finally end their Anfield hoodoo will stretch in to next season after a dominant Liverpool ensured their cross-town rivals remained firmly in their shadow for yet another year.

Sadio Mane, who scored a predatory late winner in the reverse fixture, got things started with a brilliant solo effort, relentlessly running at the visitors retreating back-line before sliding his effort through the legs of derby débutante Matthew Pennington en-route to beating Toffee’s ‘keeper Joel Robels. The young defender made up for the mistake when he bundled home Phil Jagielka’s flick-on in front of the Kop to equalize, but parity lasted for just under three minutes as a trademark Philippe Coutinho curler restored the Reds lead before the break.

Much of the talk before in the build-up centered around how Jurgen Klopp’s side would deal with the red hot Romelu Lukaku, but come full time we’d be talking about an entirely different Belgian with Divock Origi coming off the bench to bag a thunderous winner. To be fair, the result never really looked in doubt — 18-years of abject failure at Anfield means the old cliché about form, windows and derby days isn’t really applicable.

Now three for three in the Merseyside Derby, Klopp knows this is a match that packs some heat, but even the German — who is no stranger to a feisty rivalry — would have been surprised just how extra-spicy this particular encounter turned out. Although it wasn’t an entirely one sided affair in this department with Lucas putting in a foot or two, Ashley William’s studs finding Emre Can’s knee would have been a particularly nasty talking point had Ross Barkley not taken the spotlight off the Welsh defender with a few corkers of his own.

“I’m still a kind of a guest in this country. How can I decide what is OK and what is not OK?,” said Klopp, defusing the situation when asked about the Englishman lunging in on Reds defender Dejan Lovren. “My opinion is that the players should leave the pitch healthy and fit but not injured,” added the Liverpool manager, not one to keep his mouth shut, but also not one willing to take the bait. “It’s not my job to judge it. If you saw something – say it. If not be quiet.”

Now, whether or not Can will be fit enough to run out against AFC Bournemouth on Wednesday is a conversation for later, but we already know that Sadio Mane won’t be facing the Cherries having limped off less than 15-minutes after the break when the pacey winger got tangled up with Leighton Baines — really, the only dark cloud on an otherwise sunny afternoon that saw us keep the Toffee’s outside the race for Champions League football all the while consolidating our place in it. Injuries, and we’ve got more than our share, we can talk about at another time — same with the amount of matches we have left, who they’re against and how results are all that matters from here on out.

Which, of course, doesn’t include today; we won the derby and that’s all that you need to think about. After almost 20-years of coming up short, Everton losing out to Liverpool at Anfield is the new cliché — the city is red and there’s no reason to second guess it anymore. Go tell yer ma…