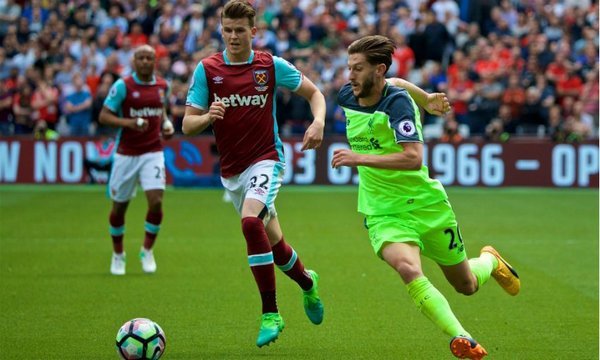 Bouncing back from a disappointing draw with Southampton last weekend with a resounding win over West Ham United on Sunday, Liverpool reclaimed third place in the Premier League, putting the distance back between themselves and the chasing pack after both Manchester City and Arsenal ramped up the heat on the Anfield outfit.

“It was a very calm atmosphere actually [in the dressing room],” said Reds attacker Adam Lallana, speaking to the club’s official website. “People were obviously talking about the pressure with the results on Saturday, but I felt very calm even in the warm-up and the dressing room,” continued the former Saints captain, knowing the players had no choice but to focus on the task at hand. “We had to be patient in the first half and obviously [Andre] Ayew had a big chance on the brink of half-time, but in the second half we came out of the blocks brilliantly and probably if it wasn’t for their goalkeeper we could have had a few more.”

Daniel Sturridge opened the scoring with a superb first half effort before Philippe Coutinho bagged a quick-fire brace and Divock Origi applied the coup-de-grace as Liverpool ran riot in London — a result that means the Reds went an entire season unbeaten in the Capital. A win over already relegated Middlesbrough next weekend at Anfield will see the club secure Champions League football for next season, but their spot isn’t assured quite yet. The pressure they felt to put in a performance against the Hammers be ramped up even more when they square off with Boro considering that not only do the Gunners and City hold matches in hand, but the Reds are missing a number of important faces.

“People may say West Ham didn’t have much to play for and they made a few changes ahead of the game but we were without players as well in Jordan Henderson, Sadio Mane and Roberto Firmino, so we were missing big players, as we have all season,” mused Lallana, reflecting on what’s been a hard season for the club injury wise. “Credit to the lads today,” added the 29-year old. “It was a big pressure game but the way we dealt with it was superb.”