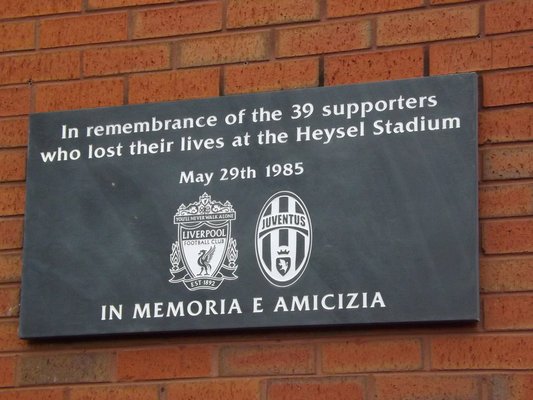 Flags at Anfield, Melwood and other Liverpool Football Club sites will fly at half-mast today as the club marks the 32nd anniversary of the Heysel Stadium Disaster — a tragic and wholly complex episode that saw 39 Juventus supporters killed and hundreds more football fans injured after a wall at the dilapidated Heysel Stadium collapsed prior to a European Cup final between the Reds and the Italian giants.

“We will always remember those who lost their lives on this day at Heysel and use this moment to pay our respects,” said Susan Black, Liverpool’s director of communications after laying a floral tribute alongside the Heysel memorial plaque at the Centenary Stand in Anfield. “Heysel is a tragedy that will never be forgotten, and today Liverpool Football Club honours all of those impacted.”

In what would be become one of the most infamous football matches ever to be played, the 1985 European Cup final between Juventus and the Reds would be forever marred when a wall in Block Z of the crumbling stadium collapsed following skirmishes between rival fans — an incident that a section of the Liverpool supporters in attendance unfortunately played a starring role in. Suggestions that the Bianconeri faithful played no part in either provocation or participation in what was common terrace fare during the 80’s is misguided at best, but that’s still well short of the point. 27 arrests were made on suspicion of manslaughter and 26 charges were laid with 14 of them given prison terms in which they served an average of about a year behind bars.

All English clubs served a five year ban from European competition with Liverpool made to serve a an additional year before being allowed to compete on the continent once again. Something of a taboo subject for the club up until the two sides met again in the 2005 Champions League quarter-finals, the permanent frost surrounding the events of May 29th, 1985 thawed in the years that followed, bringing this dark day for football back in to the light. There’s been sombre memorials for the victims across the football world today with the official Juventus website reflecting on the tragedy, remembering those we lost so that a “similar act of madness must never, ever be repeated” — wise words if ever ones were spoken.