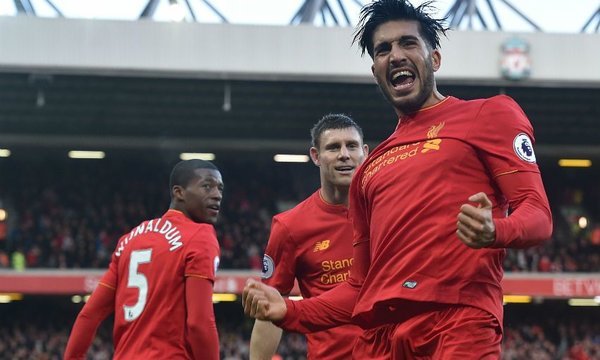 Although talks have stretched out through most of last season between Liverpool and midfielder Emre Can’s representatives over a new deal, the 23-year old looks set to snub interest from abroad and commit his long term future to the Anfield outfit.

He may be on duty with the national team, but talks are rumoured to be winding down between the two sides with an announcement of a improved contract — believed to bump him up into the very prestigious £100,000k per-week bracket — just over the horizon. While there never any real talk of him leaving with both Reds boss Jurgen Klopp and the player himself stressing that negotiations were progressing well, interest from the likes of Italian juggernauts Juventus was food for thought and the club has moved swiftly to wrap up terms.

“Just his physical presence,” said international teammate Antonio Rudiger when asked what Can brings to the Germany set-up. “As well as his close control and technique. They are all so good,” added the AS Roma defender. “The good thing is he is still so young, so he can develop further.”

It appears that Liverpool feel the exact same way. Struggling with injuries during the first half of the campaign, the German midfielder bounced back in a big way during the latter stages and stamped his authority on Liverpool’s midfield in the absence of influential captain Jordan Henderson — even going on to pip the skipper to the Reds Goal of the Season gong. Going in to the last year of his contract, it was time for the Anfield outfit to either double-down on the 23-year old or look to make some cash back on him. Liverpool have a busy summer ahead of them and though they may draft in competition in the middle of the park, Can has proved that he’s ready and willing to fight for his place.