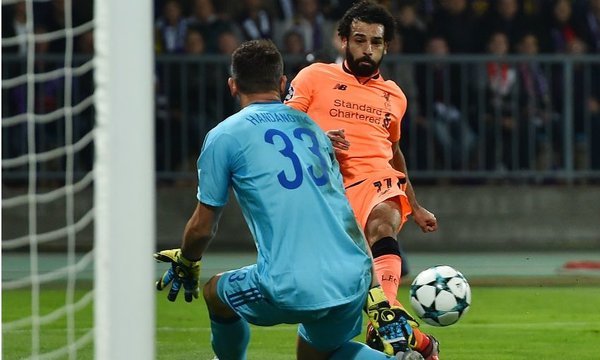 Liverpool finally found their shooting boots in Slovenia on Tuesday night, snapping a streak of bad luck in front of the net to run out 7-0 winners over Maribor in the Champions League — a scoreline that will have the punters keeping a close eye on the footy accumulators for the return leg at Anfield on November 1st.

“I think it’s an important result for us so we have to keep looking forward and we have to win the next games,” said Reds attacker Mohamed Salah, speaking to BT Sport following the match. “We had bad luck [in the last few matches]. In the last three or four games we missed many chances, if you saw the games you know we created many chances that we missed and we had bad luck,” added the Egyptian. “So now I think that everyone has confidence the good result is coming, so now we are in a good position and I’m sure in the next games it will be the same.”

Salah, who has found the net seven times between the Premier League and Europe since moving from AS Roma over the summer, was in fine form on Tuesday as he helped Jurgen Klopp’s side climb to the top of Group E.

That result is exactly what Liverpool needed on a number of fronts; having drawn their first two Champions League outings, it was starting to look iffy whether or not they’d qualify for the knockout stages of Europe’s most important club competition. Things, of course, haven’t been much better in the Premier League with the Reds wasting a whole host of chances en-route to drawing with both Newcastle United and bitter rivals Manchester United in their last two matches — games they should have won handily.

While some will brush off the result as expected, we’ve seen time and again that there’s no easy matches in Europe. With that being said, Liverpool will face a far sterner test at the weekend when they travel to North London to square up with Tottenham Hotspur as both sides look to cement their top-four ambitions.

“We didn’t concede a goal, that’s important as well, and then we scored goals, created good chances, and I think it was a deserved win. You have to score and that was the reason we didn’t win the last games,” explained Reds midfielder Emre Can. “Today we did it very well and I hope that was the game where it starts now again, the winning ways,” mused the German, already looking ahead to the weekend. “It was a great performance and [we have] Sunday now, against Tottenham – a great game and hopefully we’ll play similar to today.”