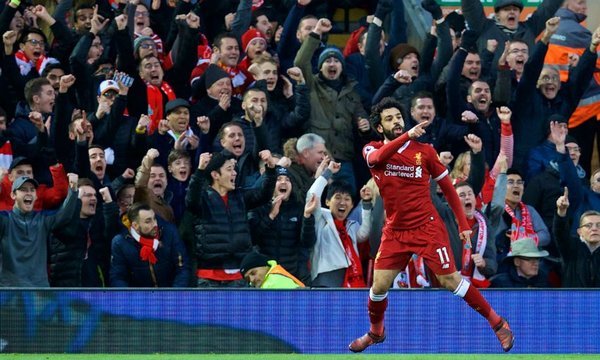 It was three goals and three points for Liverpool as the Reds registered three Premier League wins on the hop for the first time in 2017 as Southampton were well beaten on Merseyside in what was a dire return to Anfield for Southampton boss Mauricio Pellegrino.

The Argentine had stints with the Reds as both a player and a coach and though he remembers his time at the club fondly, he’ll do well to forget the Saints showing on the day as they failed to register a single shot on target while on the flip side, Jurgen Klopp’s boys look to be returning to their swaggering best. Mohamed Salah — looking every bit like the signing of the season — curled in an audacious effort to open the scoring just past the half hour mark and the King of Egypt doubled up not long after when he ran on to Philippe Coutinho’s perfectly weighted pass before beating Southampton ‘keeper Fraser Forster.

The Brazilian, who was dominant from a deeper position, added one of his own to settle any lingering nerves 20-minutes from time, but their visitors rarely threatened and when they did they lacked the kind of invention you need if you want to snag some points at Anfield. Even after falling behind, the Saints failed to come out of their shell and give it the ol’ college try, the inventive duo of Shane Long and Dusan Tadic utterly isolated and completely ineffective.

Considering Klopp had to call Ragnar Klavan in to the back-line after an injury to Joel Matip ruled out the Cameroonian, you would have expected a bit of fight from the Saints with some quick counter-attacks and a lofted ball or two over the top for Nathan Redmond to run on to testing out of the Estonian, but we saw nothing of the kind. Content to clam up and try to contain their hosts, Liverpool were more than happy to continually turn the screw with the “Fab Four” of Salah, Coutinho, Roberto Firmino and Sadio Mane all in the starting eleven for only the second time this season.

“It was just an all-round good performance, a really deserved win and for us very important to push the top of the table a little bit together,” said Liverpool boss Jurgen Klopp, speaking to the press following the final whistle. “We’re still in [there] and that’s good – [Manchester] City are obviously flying around alone; we cannot change that, but we can make pressure on all of the others and that’s what we did today.”

And, that was exactly what the Reds needed. Coming out of the international break and heading in to a trip to Sevilla on Tuesday in which we can secure a spot in the knockout stages of the Champions League before Chelsea at the weekend, we really couldn’t have asked for a better result. Now sitting only a single point outside the top-four, we’ve clawed our way back up the table in a big way and if we can put the Blues to the sword on Saturday, we’ll be well and truly back in the mixer — something that really isn’t that surprising at all.

Sure, we had a poor run earlier in the season and heavy defeats to Manchester City and Tottenham Hotspur dampened the mood, but when this team hits their stride they can go toe to toe with the best them. On the basis of what we saw today, I’m not about to proclaim that we’re back to our best, but stiffer tests are just over the horizon and if we can keep the momentum going they’re going to be in for a real scrap…