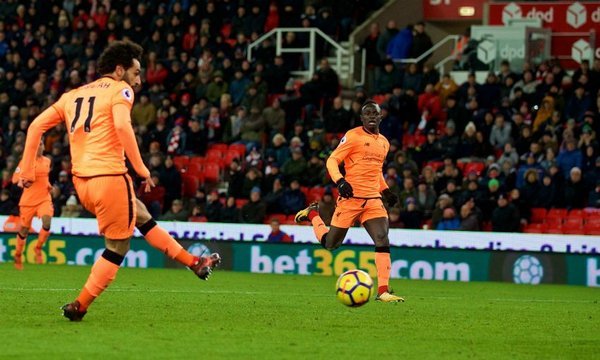 There’s an old joke about doing it on a cold night in Stoke, but Liverpool were no laughing matter as they ran out comfortable winners the Britannia Stadium to climb within sight of the top four.

In a first half marred by controversy, Sadio Mane put the Reds ahead with a composed finish, making the most of débutante Dominic Solanke’s well worked flick after Joe Gomez’s whipped in a cross that had appeared to almost — maybe — go past the by-line. Fast forward about twenty-minutes and there’s even more to leave the hosts with a case of the grumblies; as the Potters are turning the screw, Simon Mignolet looked to be heading for an early shower when the Belgian, looking very much like the last man, fouled Stoke attacker Mame Biram Diouf just outside the area.

With the net gaping and the Senegalese striker en-route to burying the equalizer, surely it’s a red card, but only a yellow is shown. Is he the last one back there? The replays make a compelling case for it and while Potters boss Mark Hughes has been left fume over what might have been, his counter-part in Jurgen Klopp saw things differently.

“That is a proper away game, it is a difficult place,” said the German, sounding relieved following the final whistle. “I don’t think it was lucky with Simon Mignolet,” added the Reds manager, coming to the defense of not only his goalkeeper, but referee Martin Atkinson. “There were two defenders around the situation and he is not the last man.”

Having been shown a card, there’s no retrospective action coming down the pipeline for the ‘keeper and though it’s hard to say whether or not Stoke go on to get something from this if Mignolet is sent off, considering our defensive record it doesn’t take a real stretch of the imagination to picture the Potters at least leveling the score.

Or, does it? Regardless of the numbers, they had their chances to find the back of the net with former Liverpool midfielder Joe Allen wasting a real opportunity to set the record straight, but he could only blaze over when it looked easier to score. The Welshman — like most — could learn a thing or two from Mohamed Salah.

Left on the bench for a bit of rest, the Egyptian came off the bench with just over 20-minutes left to play, and by the time the final whistle was blown he’d bagged himself a brace. After scoring the opener, Mane turned provider with his turn of pace creating space and his perfectly chipped cross finding the foot of the Egyptian to volley past Potters ‘keeper Lee Grant. That, of course, wasn’t the last the English shot-stopper would see of Salah as the 26-year old added another mere minutes later, gifted a free run at goal after Erik Pieters made a hash of a bouncing ball.

Close it out with some comical finishing, or a lack thereof, between Crouch and Diouf and you’ve got a good night on the road. Leapfrogging Tottenham Hotspur and in to fifth place, the Reds are now unbeaten in seven on the hop and not only look well placed to put up more points on the board when they visit newly promoted Brighton and Hove Albion at the weekend, but push on and secure a spot in the next round of the Champions League when Spartak Moscow travel to Anfield on Tuesday.