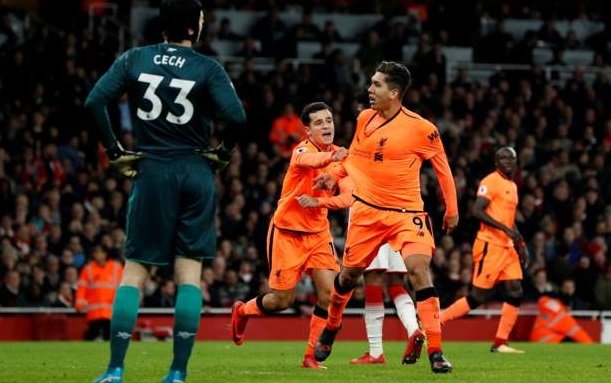 Liverpool is going to do as Liverpool does and having grabbed a commanding two goal lead after holding the match by the scruff of the neck, they had to rely on a powerful Roberto Firmino strike to salvage a draw at the Emirates Stadium after an Arsenal surge saw the hosts score three in less than five minutes.

Philippe Coutinho scored his first headed Premier League goal to get things started in North London and after the Reds squandered a number of good opportunities, Mohamed Salah added some insurance not long after the break when he doubled their advantage following a textbook bit of counter-pressing football. The visitors looked on course for a comfortable victory, but the just when we thought the Gunners didn’t have any powder in the ol’ cannon they fired back in a big, big way.

Individual errors continue to be our undoing. Liverpool’s problems at the back still haven’t been solved and while they’ve been easy to gloss over during the past couple of weeks, in a matter of minutes they bubbled to the surface.

Joe Gomez, who had an excellent match otherwise, has a brain fart and Alexis Sanchez’s pokes in around him and his stooping header gives Arsenal a life-line. It’s a deep breath, start again situation, but we never find our composure as Granit Xhaka — who has had a terrible outing up to this point — sends a left-footed thunderbolt straight down the center that Reds ‘keeper Simon Mignolet just can’t handle.

A bad pass from Raganar Klavan see Andy Robertson lose the ball in a bad position and not content to just see things leveled up, Alexandre Lacazette does well to hold off a pair of defenders before his inch perfect back-heel finds Mesut Ozil streaming in to the box. The German, for the most part anonymous, of course makes no mistake and the North London side — down and out only moments ago — are not only in front, but in the ascendancy. Arsene Wenger, on the verge of what looked like tears after Salah scored, is now smiling from ear to ear.

It, of course, wouldn’t last as Arsenal’s own shambolic defending came back to haunt them as Emre Can found Roberto Firmino in acres of space and though Gunners shot-stopper Petr Cech would get two solid hands to the Brazilian’s shot, it wasn’t quite enough as the ball looped up before nestling in the back of the net.

“It is difficult to explain, we should be three, four even five-nil up before we don’t defend a cross. It feels really strange,” said Reds boss Jurgen Klopp, feeling that familiar deja-vu. “A point at Arsenal is a good result for most teams in the world but it feels not too good at the moment,” added the German manager, echoing remarks from his post-Everton press conference. “We made mistakes on both sides of the game but it is unlikely to win 6-3 or something at Arsenal. We didn’t take all of our chances but three goals should be enough,” concluded the Liverpool manager. “Arsenal were not in the game apart from 10 minutes.”

Debatable, sure, but he’s not far off. So good in the first half that you could only laugh at the Gunner’s attempts to keep up and so bad over a five minute period that tears wouldn’t quite do it justice — it’s Liverpool doing as Liverpool does.

We’ll still be in the top-four through Christmas so fuming for the sake of fuming just isn’t on, but that being said, if someone would have offered me a share of the spoils before the first whistle, there’s absolutely no way I would have taken it. It’s the individual failings that make it tough to stomach and the collective brilliance that makes it worth watching. We’re on our way…