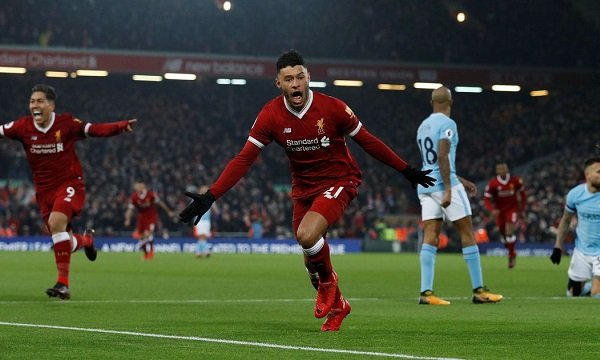 Putting down a marker to start the post Philippe Coutinho era, Liverpool stopped Manchester City’s march to an unbeaten season dead in it’s tracks with three goals in eight minutes ensuring that the Reds came out on top in what ended up being a seven goal thriller at Anfield.

Roberto Firmino, Sadio Mane and Mohamed Salah all scored during a frantic opening to the second half, but it was Alex Oxlade-Chamberlain that got the ball rolling less than 10-minutes in to proceedings with a low drive that beat City ‘keeper Ederson for pace. Doubling down on his dribbling skills, the 24-year old’s bullish run through the middle was a calculated gamble, but he hit Black Jack as the hosts went on to keep their 18-match hot streak alive.

“Obviously it’s a nice statement for us because they’ve been brilliant all year,” said Chambo, speaking to the press after the final whistle. “We knew we had it in us if we were 100% at the races. We know they like to play from the back and are good at it and we thrive when teams do that,” added the English midfielder. “The second half when we went on a bit of a rampage for five or 10 minutes. The manager keeps telling me to shoot so I had a go and it went in.”

Liverpool may have been brilliant going forward, but the Citizens highlighted their ongoing problems at back with the kind of rally that you’d expect from the champions elect. Having raced to a 4-1 lead, the hosts were unable to hold on with Bernardo Silva finishing a flowing move and Ilkay Gundogan prodding home another to make set up a tense finish and leave Reds boss Jurgen Klopp shaking his head.

Each of City’s goals were completely avoidable, but if you wanted to point to one as the pinnacle of Liverpool’s failings it would be Leroy Sane’s from the first half. Wrong footed by a cross-field ball, Joe Gomez allowed the tricky winger to glide in to the box and instead of trying to set up a team-mate, he instead rifled in a shot that somehow beat Reds ‘keeper Loris Karius at the near post — a save he really should have made.

“Yes of course it’s the corner where he was. You showed it to me. People always find the hair in the soup. Loris knows it,” said the German manager when asked if Karius was at fault the visitors first goal. “The Man City goalkeeper probably caused Salah’s goal but nobody will talk about that,” continued Klopp, quick to highlight the double standard. “To concede three goals was not too cool but as a manager if you play football like we do the rest will come. For tonight it’s perfect – that’s a fair result.”