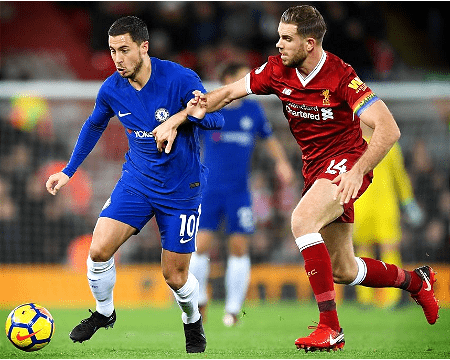 Following the momentous achievement of reaching the Champions League Final, a decade on from Athens in 2007, the Reds now prepare for “another Semi-final” as Jürgen Klopp has insisted both Liverpool’s remaining two Premier League games are crucial in the final chapter of the campaign.

It is really easy to forget that we still have two massively important Premier League games to play when you have witnessed your team reach the final of the European Cup. That is what it is all about. Too long we have had nothing to play for come the end of the season, and credit to Jürgen Klopp, since his arrival, have been competing until the last whistle of the season.

Liverpool travel to London for a super Sunday showdown against Antonio Conte’s Blues with the two sides battling it out for a top 4 spot. Klopp’s men currently lay in third place knowing that victory at Stamford Bridge will confirm back-to-back qualification in to Europe’s elite club competition. Whilst Chelsea currently occupying fifth place, know that this game is a must win for their Champions League hopes.

The hosts have won three of their last five Premier League games;

Last years champions have not been too impressive this season under Conte who could very well be out the door come the end of May. Any chance the Italian has of remaining at Chelsea relies on Champions League qualification, in which they must take all three points on Sunday.

With Liverpool’s run to the Champions League final, it can be said that this has had an effect on league form for Jürgen’s side as the Reds have won two of their last five, drawing three.

But a win on Sunday for Liverpool will confirm their place in the top 4 and next seasons Champions League. If the Reds fail to win, then like last season, top 4 will be decided on the final day of the season. Though it will be preferred for qualification to be confirmed this Sunday, it wouldn’t be the Liverpool way to do it the hard way. It does however bode well if it comes down to the final day as the Reds take on relegation threatened Brighton, albeit not any more, after the Seagulls secured their right to stay in the Premier League another season as they overcome Manchester United Friday night winning 1-0.

Adam Lallana – Despite Lallana returning to full training, the Englishman will not be rushed back into action after suffering a hamstring injury in Liverpool’s last visit to London against Crystal Palace. With the Champions League final on the horizon, and Liverpool’s lack of variety in the midfield, Lallana looks like he will be available for the trip to Kiev on May 26th.

Joe Gomez – After suffering an Injury last week, Joe Gomez is not likely to feature tomorrow and the extent of the injury is uncertain to his recovery time.

Emre Can – A little like Phil Coutinho prior to his departure to Barcelona in January, Emre Can has been absent from the squad due to a back injury, It is likely the German will not feature again for Liverpool as Juventus look set to sign the Midfielder in the summer. However the Reds manager confirmed that he may be fit in-time for the tie with Real Madrid.

Liverpool will certainly go to the Bridge full of confidence, but with little option for Klopp to rotate, it will likely be the same team that started in Rome on Wednesday night. I expect there may not be as many goals in this one and may need the current top scorer, Mohamed Salah to be the difference after two quiet outings to Stoke City and his former club AS Roma.