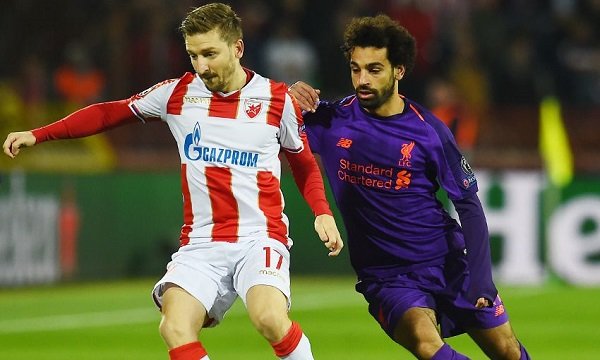 We knew that our trip to Belgrade wouldn’t be a stroll through the tulips and two first half goals from Milan Pavkov confirmed as much as Red Star cruised to their first ever win in the Champions League proper. Failing to find their “mojo”, Liverpool not only left Serbia empty handed, but they also let their firm grasp on Champions League Group C slip in the process.

Tight quarters bring big odds and the sign up bonus at ladbrokes will be looking extra tempting for those wanting to have a flutter on the Reds chances of making it through. Second to Napoli, they’ll now have to win one of their last two matches in order to secure a spot in the knock-out rounds — a tough ask considering they’ve already lost once to the Italians and a potential do or die showdown looms against Paris Saint-Germain at the Parc de Princes on the final match day.

“They didn’t give up fighting, they stayed concentrated and they gave everything,” said Liverpool boss Jurgen Klopp, sending his congratulations to Red Star. “For us, it was not clicking, it was not easy,” conceded the German manager. “I saw, unfortunately, a few games like this already and it’s really difficult to find your mojo back,” mused the gaffer. “You always try to sort the problem you have on the pitch; you don’t find solutions, you sort problems on the pitch – and that’s a completely different situation.”

Unable to move the Serbian back-line around enough to create any exploitable gaps, the visitors were forced to shift the ball out wide and by that time neither Sadio Mane or Mohamed Salah could find a route to cut in and really cause some damage. They’ve been grinding out results and remain unbeaten in the Premier League, but this is a result that’s certainly been coming.

Lacking any drive from midfield and missing the likes of Naby Keita, who was fit enough for the bench, and long term absentee Alex Oxlade-Chamberlain, the Reds looked devoid of ideas and bite in the middle of the park. Fabinho, who racked up 9-tackles against the Serbians in the first leg, was dropped from the starting eleven after a disjointed performance against Arsenal at the weekend — tellingly, there wasn’t a single tackle completed by any of the midfield three on Tuesday.

“As players we’ve got to take responsibility. It was a slow start all round really, and we gave them far too many opportunities – especially from set-pieces,” explained Liverpool midfielder Adam Lallana. “We had chances and we came out at the start of the second half which was better, but we weren’t ruthless enough and we weren’t patient enough,” added the Englishman, who underperformed on the night. “Of course there will be a reaction,” he added, hinting towards the meeting with Fulham on Sunday. “It’s not the first time we’ve lost games and it’s about how you react and how you bounce back but we are thoroughly disappointed to come away with nothing.”