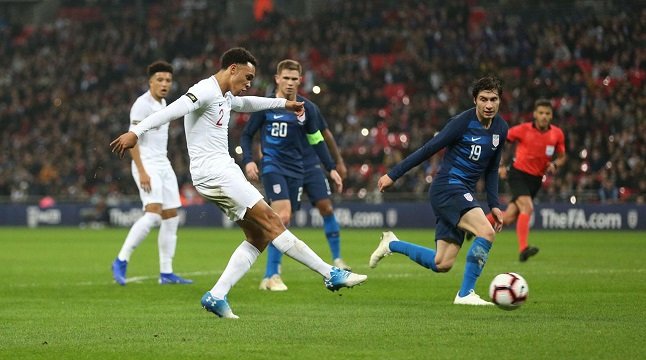 On the back of his truly impressive form for Liverpool, there was no surprise when Reds youngster Trent Alexander-Arnold was named alongside club captain Jordan Henderson and the increasingly indispensable Joe Gomez in Gareth Southgate’s England squad, but there was more than one eyebrow raised when the 20-year old fulfilled what he’s since called a “childhood dream” by bagging his first senior goal for the Three Lions in an emphatic 3-0 win over the United States at Wembley.

Building on their strong showing at the World Cup, the online betting gurus had the hosts as favourites to come out on top in front of the home crowd and they didn’t disappoint with their young stars in particular lighting up the night.

Manchester United attacker Jesse Lingard opened the scoring just before the half-hour mark with a fantastic curling effort, but it was Alexander-Arnold that really caught the eye in the capital. The Scouse fullback has shown on more than one occasion how good he is going forward — his quick thinking and eye for a pass bagged him an assist as Liverpool brushed past Fulham on Sunday and things have only gotten better for him as the week has gone on.

A mere two minutes after the deadlock was broken the Reds defender put his attacking instincts on display, bursting in to the box with the kind of aggressive run he’s becoming known for before finding the back of the net with a low, angled drive that gave USA ‘keeper Brad Guzan absolutely no chance of stopping.

If taking Michael Owen’s spot as the youngest Liverpool player for score for England wasn’t enough, the 20-year old kept things tidy at the back — including helping to keep fellow up and comer and perennial Liverpool target Christian Pulisic quiet as the Borussia Dortmund attacker switched between the wings and ran between the lines on what was ultimately a frustrating night for the American international.

Maintaining pace in the race to topple Manchester City at the top of the Premier League as well as qualification for the knock-out rounds of the Champions League will be high on Alexander-Arnold’s check-list as we creep towards the turn of the year, but the Scouse defender has almost certainly done enough to keep his place in the England set-up which means he’ll have one more internatinal commitment to navigate as the Three Lions square up to Croatia for a UEFA Nations League clash in three-days time.