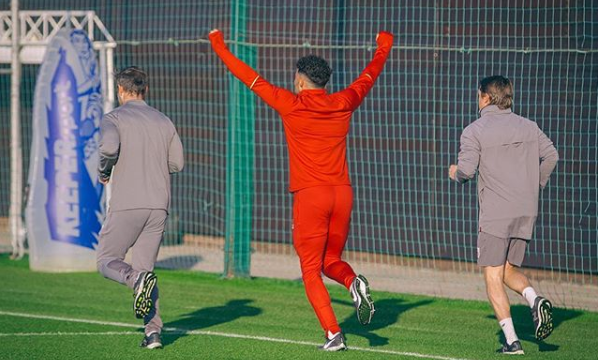 Although it was expected that Liverpool midfielder Alex Oxlade-Chamberlain would miss the entirety of the season after a debilitating knee injury suffered during the Reds Champions League semi-final win over AS Roma resulted in him requiring knee surgery, it sounds like we could very well see the industrious Englishman before the close of the campaign.

With a successful spell on the sidelines behind him, the 25-year old is slowing working his way back to fitness and has begun running on the pitch at Melwood — a significant step forward for the former Arsenal man.

“With Ox, from the first step it looked like Ox and that was really nice,” said the Liverpool boss Jurgen Klopp, describing Chambo’s first session outside. “Then we had to wait for the reaction – and there was no reaction, which is even nicer,” continued the German manager. “No pressure put on him, but it looks like he could maybe be back in normal training in late February – maybe, I am not sure, [maybe] March,” explained the gaffer. “So that gives us hope he will be back in the season.”


Heading in to Saturday’s meeting with the Gunners, Chambo will be watching from the stands as the Anfield outfit look to cement their spot at the top of the Premier League, but he’ll do so knowing that he could very well return at a pivotal moment for the team.

There’s still a long way to go, but with half the season gone Liverpool remain unbeaten and with a six-point lead over nearest chasers Tottenham Hotspur. The Premier League is a gruelling competition and when you couple that with the fact that the FA Cup kicks-up at the end of January and a Champions League Round of 16 tie with Bayern Munich looms large in February, Klopp will be more than happy to have another top class player at his disposal.

That, of course, isn’t to say that the German manager hasn’t done well with his recruitment. It’s been nothing but quality coming in since he took charge and at this point of the season he’s watched on as his side claimed an astonishing 16-points more than they had at this stage last season.

“There are a lot of players still here and it was like a puzzle, you just keep bringing in these players you need and now it’s a perfect match,” explained Reds defender Dejan Lovren. “You feel that in the squad, it’s how it should be. There has always been something missing all these years but now we have everything,” added the Croatian, impressed by the depth of the squad, but stopping well short of saying it’s enough win the title. “For us, every game is a final. It’s good to hear all these positive words but we don’t live on these positive words, we live on winning games.”