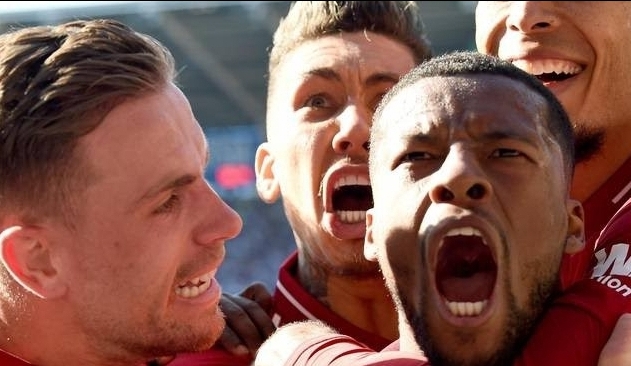 After squeaking past Tottenham Hotspur to briefly regain the lead in the race for the Premier League title, Manchester City’s reign at the top was short lived as Liverpool responded in kind with a hard fought victory over relegation threatened Cardiff City.

The Reds, as is becoming the norm, were made to work for the win with first half chances for Roberto Firmino, Sadio Mane and Mohamed Salah all falling by the wayside. The breakthrough actually came through an unlikely source with Georginio Wijnaldum — a man not known for scoring away from home — thundering in from a corner routine straight out of Melwood.

“We trained for it, but the ball was coming high in the first half,” said the Dutch midfielder, speaking with the press following the final whistle. “I was so free in the first half, I told Henderson to tell Trent to put a low ball in, I got onto it and it was a good finish,” added Wijnaldum, clearly proud of the strike. “In the first half we dominated and had three big chances – we didn’t score the goals but in the second half, with the set-pieces we got the first, but we controlled the game.”

Whether or not they controlled the game, proceedings could have taken a drastic turn at any point with the Blue Birds — knowing full well their between a rock and a hard place — making life difficult and creating chances of their own in a desperate bid to stay in the top flight.

Sean Morrison, in particular, had the goal at his mercy from a corner, but somehow headed wide instead of drawing his side level. Not long later the Englishman was involved in another key moment at the other end of the pitch when he fouled Salah in the Cardiff box. A James Milner penalty later and the visitors are two goals to the good and three-points to the better.

“We had the ball most of the time and still created three brilliant chances, which we probably usually finish off,” mused Reds boss Jurgen Klopp. “We didn’t do that – it can happen – so then you have to stay patient, be calm,” continued the gaffer, staying realistic. “You need to stay 100 per cent focused on each set-piece because that’s what they go for and it’s pretty difficult.”