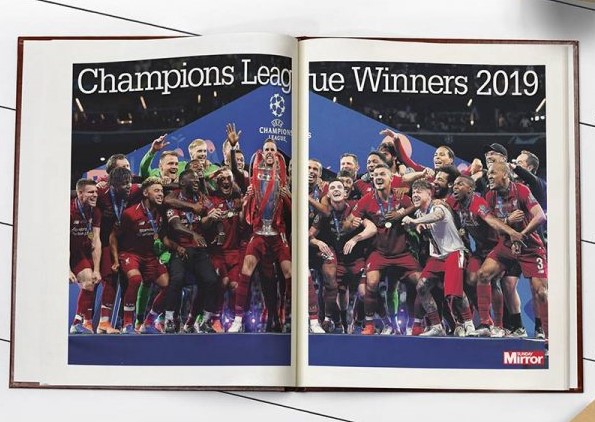 For someone who grew up in the 90s, and fell in love with Liverpool FC in the early 2000s, it is fair that I am not aware of every single story about this beautiful club since it was founded back in 1892.

The subject Liverpool book consisting of newspaper headlines starting from 1906, the year the Anfield club won their second of eighteen league titles (soon to be nineteen), is a high quality, highly informative ride through the history for the supporters.

It is an illustrious guide through the decades, revisiting all the vital events in the memorable history of the Reds, right up until we won our Sixth European Cup last year.

Living away from the United Kingdom, I’ve mainly had online interaction with the British Media outlets via their websites and never got hold of a Newspaper.

So, to have a personalized book, professionally completed, with all the historic newspaper headlines/reports (even from early 1900s) about the achievements of Liverpool, fills me with pride.

From Paisley’s all conquering side to Fagan’s treble winners, from the miracle of Istanbul to the glory night in Madrid, the book covers all of our major European triumphs including an interesting victory under Shankly that some fans might not be aware of.

In the 1965 European Cup, after 300 minutes of football, a double toss of coin helped Liverpool advance to the semi finals and Cologne were left devastated (LFC).

The reports from the famous European nights at Anfield vs the likes of Chelsea, Roma and most recently against Catalan giants Barcelona have been covered but the book does not include painful defeats in the European finals.

Similarly, league title triumphs are there but heart breaking losses e.g. against Arsenal in 1989 and versus Chelsea in 2014 are not included. Since we have not won the title in almost three decades, the major highlights in the Premier League era includes headlines from massive victories against rivals, especially versus Manchester United and Everton.

Nevertheless, we are all set to end the title drought this term and need just four wins from the remaining ten games to win the Premier League under the guidance of Jurgen Klopp. The newspaper headlines are surely going to be special and memorable when the Reds will finally be crowned Champions again.