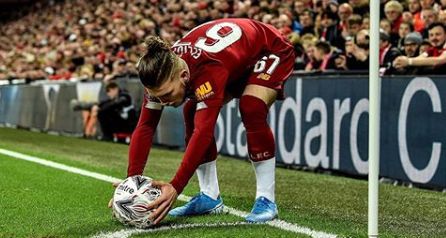 Last summer, Liverpool hired the services of teenage sensation Harvey Elliott from Fulham and the youngster has now signed his first professional contract with the Merseysiders.

Back in May, Football Insider revealed that a deal worth £1.04million-a-year (£20,000-a-week) was finalized but the European Champions opted to delay the announcement. Earlier today, the Anfield club finally made the deal official.

Jurgen Klopp has been a huge fan of the boy. Back in September 2019, the German manager stated (Goal):

“He is a brilliant boy, he takes the situation really well and wants to learn. He will always be a special player for moments, but you see overall with his defending and movements, it is not easy so that is really good.”

After the 17-year-old agreed a new contract with the newly crowned Premier League champions, the former Dortmund manager once again praised him and stated that he is at the perfect place to excel in his career (LFC).

The youngster has already made 8 senior appearances for the Reds but he is still waiting to score his first goal. For the Youth team, Elliott has so far scored 4 goals and provided no fewer than 9 assists in all competitions.

He was mainly impressive in the UEFA Youth League. In that tournament, the winger started 7 games and directly contributed (Transfermarkt) in 6 goals (1 goal and 5 assists).

Yesterday, the teenager was part of the Premier League Match Day squad vs Aston Villa but he did not get the nod to come on as a substitute. Once again, Klopp took time out to praise him and said (Liverpool Echo):

“It is hard to bring on Curtis and Neco and Harvey is sitting there because he is incredible. We take the situation completely serious. They do not play because they are young. Curtis came on and was involved in everything. The goal he deserves. He anticipated it.”

In your view, is Elliott good enough to replace Shaqiri and become our second choice right winger? The Swiss international has spent a lot of time out injured this season and he is linked with a move away from Anfield (Fotomac).