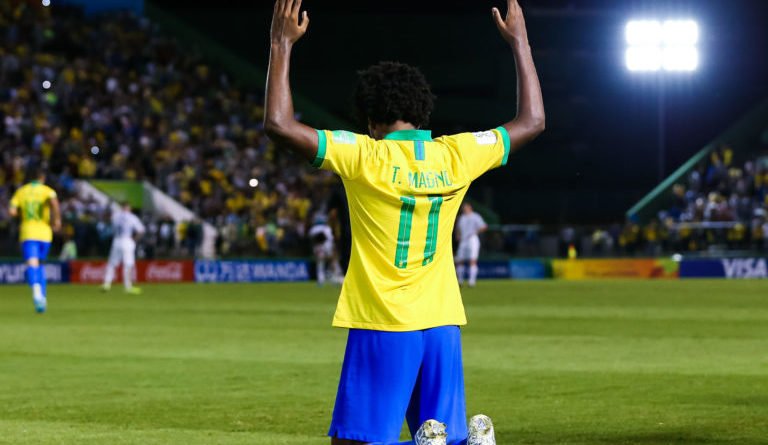 Liverpool have been linked with Brazilian attacker Talles Magno for some time and the latest reports are intriguing.

Back in May, Spanish news source AS reported that the Reds are strongly interested in signing the teenage sensation, who has got a release clause of 50 million euros (£45million) in his contract with Vasco Da Gama.

As per the latest update coming from Brazil, the Merseysiders are firm favourites to sign the 18-year-old starlet in the summer transfer window.

According to Esporte News Mundo, top European sides are looking to sign the forward but Klopp’s Liverpool have got a huge advantage due to the player’s preference.

The South American outlet have mentioned that just like Selecao stars lke Jesus and Vinicius wanted and completed their respective moves to Manchester City and Real Madrid, Magno would like to move to Anfield.

It is mentioned that Vasco Da Gama’s asking price is 30 million euros, however, people close to the president of the club are convincing him to let the player leave for just 20 million euros.

Esporte News Mundo claim that the youngster’s talent is now being recognized and citing reports from Europe, it is mentioned that he has what it takes to perform better than the likes of Jesus, Vinicius and even PSG superstar Neymar.

Magno is mainly a striker but so far, in his career, he has mostly played as a winger for both the club and the country.

Last year, in the U-17 FIFA World Cup, he played on the left wing and scored in victories against New Zealand and Angola. He also featured for full 90 minutes in the Round of 16 clash with Chile but was sidelined for the last three fixtures due to injury (Transfermarkt). Nevertheless, Brazil did not miss the attacker and won the competition by beating Mexico 2-1 in the final.

Liverpool do need to improve the depth of their attacking department and if Talles Magno, who is wanted by Barca, AC Milan, Chelsea, PSG, PSV and the Los Blancos (Esporte News Mundo), is really as good as the reports are suggesting, then a fee of 20 million euros should be considered as a bargain.