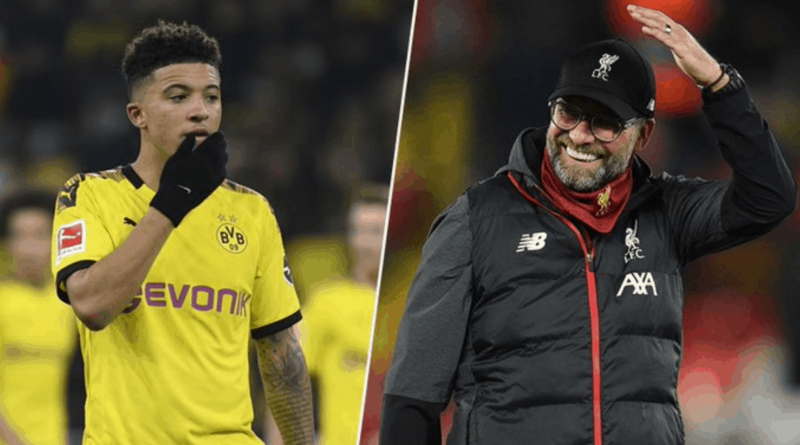 Liverpool are now being touted as one of the favourites to sign Jadon Sancho after Manchester United failed to land the Borussia Dortmund star during the summer transfer window.

At the start of the summer, United were widely expected to sign the 21-year-old as they were one of the few big European clubs who could afford the mega transfer in the face of the financial crisis that’s hit football over the past 6 months.

However, despite lengthy negotiations between the two clubs, United failed to agree a deal with Dortmund after refusing to meet their £108m asking price and Ole Gunnar Solskjaer had to settle for signing a 33-year-old striker, a left-back and a couple of teenage kids on deadline day.

Man Utd’s failure means Sancho is now set to leave Dortmund next summer and the Red Devils will face a fierce battle for his signature in 2021 as several other top clubs are expected to join the race for the talented winger.

Liverpool have been linked with Sancho in the past as Jurgen Klopp is a huge fan of the youngster but the Merseysiders weren’t in a position to spend over £100m on him this summer. Despite winning the Premier League and Champions League over the past two years, money was relatively tight.

Many bookmakers had Liverpool priced as the 25/1 fourth favourites to sign Sancho during the summer window but this Kenyan casino site has now cut the odds to around 10/1 for the attacker to end up at Anfield next year.

This comes off the back of a report from The Independent that claims Liverpool are now in pole position to sign Sancho in 2021 after Manchester United blew their chance to land the England international.

The newspaper says Sancho’s preference was to join Liverpool this summer after holding talks with Klopp but it was never realistic given the clubs finances. That will change next summer so Liverpool are now leading the race for the Dortmund star.

Bayern Munich are also tipped to join the race so they could provide stiff competition while Real Madrid, Chelsea, Juventus and Barcelona are also among the bookies favourites but it seems Liverpool will be right in the mix for Sancho next summer.

There has been plenty of speculation surrounding Sadio Mane and Mohamed Salah’s future’s at Anfield as they’ve both been linked with moves to Spain. The pair have been outstanding signings and have played integral roles in Liverpool’s recent success but it wouldn’t be a surprise if one was sold to make room for Sancho.

Both Mane and Salah will be 29 next summer so Liverpool may feel it will be their last chance to get a substantial transfer fee before their value starts to drop. The Reds could realistically sell Mane or Salah for more than it will cost to buy Sancho so they could even turn a profit.

It’s gearing up to be an exciting 2021 summer transfer window with several big names potentially on the move and it wouldn’t be a surprise if we saw Sancho ending up at Anfield with Mane or Salah heading to Spain.