Liverpool ripped Wolves apart in the Premier League on Sunday night and next up, they will face Midtjylland in their final group game of the Champions League.

The Reds have already confirmed top spot in the group and therefore, we can expect Jurgen Klopp to rest majority of his star players and hand youngsters the chance to shine.

Young Kelleher, who has kept two clean sheets in the last two fixtures, should get the not to start in the goal vs the Danish side.

In the right back role, Alexander-Arnold, who only featured as a second half substitute at the weekend, could return to the starting XI.

In the central defense, Rhys Williams could partner Joel Matip. Brazilian international Fabinho should be rested. Greek defender, Kostas Tsimikas, should replace Robertson to feature in the left back position.

As far as the midfield is concerned, the likes of Milner, Thiago, Oxlade-Chamberlain are still not available. Wijnaldum could be rested and we may see the likes of Jones, Henderson and Keita start in the center of the park.

In the attacking third, the likes of Minamino and Jota could replace Salah and Mane to start on the flanks. On the other hand, Divock Origi may get the nod to play as the lone center forward up front in place of Roberto Firmino. 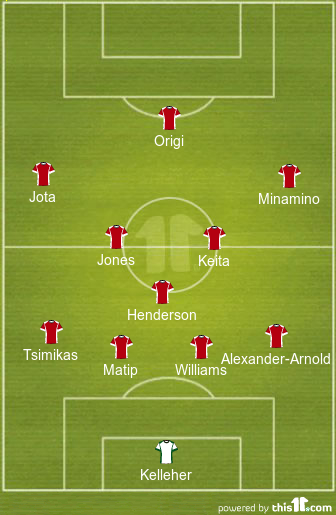