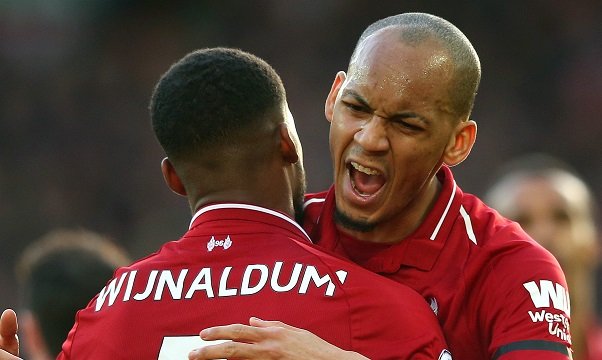 Liverpool hired the services of Fabinho from Monaco in the summer transfer window of 2018 and the Brazilian international has proved to be a major hit at Anfield.

The Samba star did brilliantly in the defensive midfield role for the Reds but this season, with Van Dijk and Gomez out injured, he has mainly played in the central defense and excelled big time.

As per reports going on in the media, Liverpool prepare to agree a lucrative new contract with the versatile South American star to keep him at the club for the long term.

According to a report covered by The Guardian, the Reds plan to hand Fabinho a bumper new deal that would make him earn just little less than the top earners at Anfield.

The renowned British news source have mentioned that the 27-year-old, who current earns £100,000-a-week, will be out of contract in less than 2 years and the Merseysiders want to extend his stay to 2025 or 2026

It is further mentioned that the Premier League champions are also hoping to agree a new deal with Gini Wijnaldum. The Dutch international is the most used midfielder by Jurgen Klopp and he is still a key member of the squad.

In the current campaign, so far, Fabinho has played 9 games as a center back in all competitions and has helped the team keep no fewer than 6 clean sheets. He is clearly proving to be the leader of the back-line in the absence of Van Dijk.

In my view, without a shadow of a doubt, the 12-capped international deserves to get a lucrative deal. At the moment, our highest earning stars are Salah (The Mail) and Thiago (The Athletic), who get around £200,000-a-week. In your opinion, does Fabinho deserve a huge pay rise?