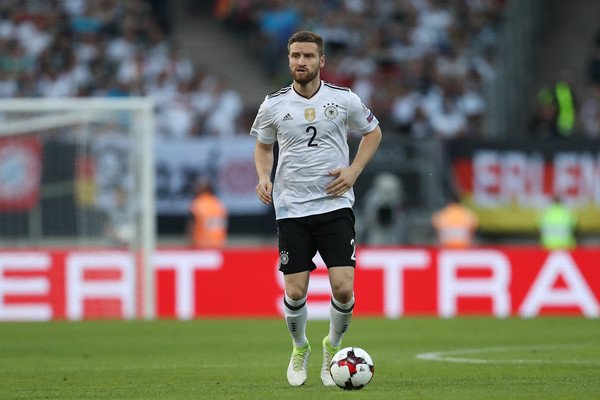 Liverpool ended their barren run in 2021 by beating Tottenham Hotspur 3-1 in their own backyard but they suffered yet another defensive set-back.

Joel Matip, who has been highly injury prone, was subbed off at half time due to an ankle injury and reports are not looking positive as confirmed by Klopp.

It must be remembered that Fabinho, who has mainly played in the central defense this term, could not feature against Spurs due to a minor muscle issue.

On the other hand, the likes of Van Dijk and Gomez are already out injured with long term knee concerns. In such a situation, Klopp desperately needs to sign a center half.

Former Anfield center forward, Peter Crouch has backed the Reds to sign a stop-gap in the form of Shkodran Mustafi. On BT Sport, Jermain Jenas asked whether the Reds should move for the Arsenal man and whether the fans would be happy with his signing. Crouch responded (via The Express):

“Yeah, because those boys can go back into midfield. Fabinho (and) Henderson take so much away from the midfield if they’re dropping back in. The kids are kids, they’re not ready for the Premier League at the moment.”

“I think a stop-gap at the moment is exactly what they need.”

Mustafi is an experienced player but his performances have been highly inconsistent for Arsenal. Recent reports have indicated that the German international is in talks to end his contract (due to expire in summer) with the Gunners early (Football.London).

If that happens, then Liverpool would have the chance to get his signing done on a free transfer.

The 28-year-old, who earns £90,000-a-week (The Mirror), was part of Joachim Low’s squad that won the World Cup in 2014 and the Confederations Cup in 2017. He has won two FA Cups with Arsenal and has played over 150 games in all competitions for the north Londoners.

At the moment, Jurgen Klopp is without a fit senior central defender and Liverpool must act fast to solve the defensive conundrum if they are to retain the Premier League title. Do you think, we should hire the services of Shkodran Mustafi?