Arsenal defeated Chelsea last night and that has given Liverpool hope of finishing in the top four. However, the Reds face their toughest test in the form of Man United.

As far as the team news is concerned, the Reds will be without Ozan Kabak as the Turkish international is still not fit. In such a scenario, it would be better if Williams starts with Phillips in the central defense.

Fabinho can play in the central defense as well but the Brazilian is badly missed when he is not in the midfield and we have been much much better with him in the center of the park.

The former Monaco man should partner Thiago and Wijnaldum in the midfield. The likes of Trent and Robbo should retain their fullback positions.

Alisson has been brilliant for us lately and we need the Samba star at his best to keep a clean sheet at Old Trafford.

As far as the attack is concerned, Klopp should make one key change. Roberto Firmino should return and replace Diogo Jota to start with Sadio Mane and Mohamed Salah up front.

Here is how Liverpool should line up vs Man United: 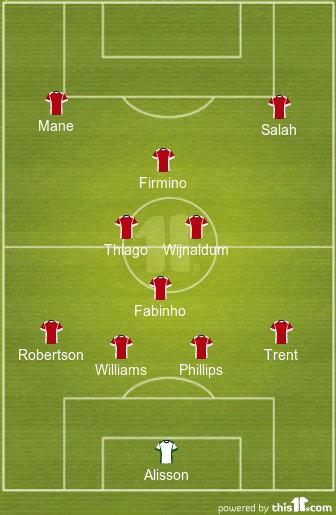