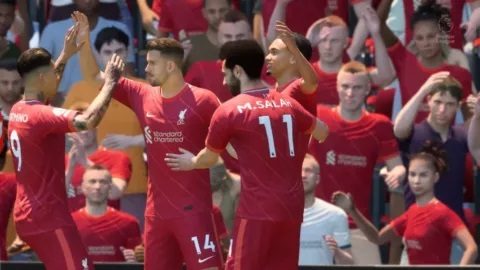 The new football season has dawned upon us, but not on the gaming front yet. The latest instalment in the blockbuster football series – FIFA 23 – will be released soon, with 30 September 2022 being the date set for the worldwide release on PlayStation 4, PlayStation 4, Xbox Series X|S, Xbox One, PC and Stadia. With the date in mind, players and fans are highly anticipating the new issue to hit the shelves.

Several new features have been added to the latest version of the game, with both Men and Women’s FIFA World Cup included, along with women’s club football, cross platform play and the use of HyperMotion2 Technology that delivers twice as much realism thanks to the capture of over 6000 real-life animations. Teams will be much harder to beat, and it goes without saying how taking top teams such as Bayern Munich, Real Madrid and Manchester City will ease your gameplay experience. To add to that roster is Liverpool, who are undoubtedly one of the highest-rated clubs in the world.

On the back of a 92-point domestic season and reaching the UEFA Champions League finals, Liverpool players will experience an increase in their ratings in FIFA 23. Following a formidable campaign across all fronts and despite losing world-class winger Sadio Mane, the Reds maintain their reputation as one of the best outfits in FIFA 23.

Each player for licensed football clubs in the game are ranked from 1-99 on an overall basis. Leaked information has given us an overview of how Liverpool have run into an average increase in ratings across the squad.

At a rating of 90, Virgil Van Dijk and Mohamed Salah are the two highest rated players in Jurgen Klopp’s 27-man squad. Both aces have been upgraded with a +1 from their 89 rating in FIFA 22. For the first time since the 2018/19 season, the Premier League Golden Boot was shared between two players, Heung-min Son and Salah, with the Egyptian netting 23 goals and registering 14 assists in the league. Van Dijk also displayed great intensity throughout to see an increase in rating.

Next to the aforementioned duo is shotstopper Alisson who remains as the highest rated player below 90, at 89; he shared the Premier League Golden Glove with Ederson last season. Wingbacks Trent Alexander-Arnold and Andrew Robertson stick to their respective 87 rating, whereas central midfielder Fabinho takes a +1 hit to land at 87. Thiago is unchanged at 86, but forward Diogo Jota, following his impressive form last season is at 85, three more than in FIFA 22.

Former Porto winger Luis Diaz is slowly proving himself worthy of a starting place in the eleven, justly witnessing a +4 upgrade to 84. Center-back Joel Matip also sits at 84, up from his previous 83 rating in FIFA 22. Jordan Henderson and Roberto Firmino – both at 83 – see a -1 and -2 drop respectively following a rather sub-par campaign as per their standards. New signing from Benfica, Darwin Nunez has an 82 rating, jumping up from his previous 79. Joe Gomez (-1), Ibrahima Konate (+3) and Naby Keita (-1) all share an 81 rating.

Having lost his place in the starting eleven due to a downturn in form, James Milner lies at 78, down from his 79 rating in FIFA 22. Alex Oxlade Chamberlain (-2) and Kostas Tsimikas (+3) both sit with a 77 rating. Youngsters Harvey Elliott and Fabio Carvalho have been rated 73 overall, whereas third-choice goalkeeper Adrian sees a 72 rating.

Ten players have seen an increase in rating, while five see a slump overall. Four players – Alisson, Andrew Roberson, Alexander-Arnold and Thiago – do not see any change in the respective figures. With such ratings, one can expect Liverpool to put up quite a show over other teams on a head-to-head basis in the new version of the game.

As per statistics, FIFA 23 is touted to be one of the highest selling editions of the renowned gaming franchise. Online gaming is also an important part of the FIFA franchise, with Ultimate Teams garnering a great deal of attention from a major chunk of fans.

The gaming industry also branches out to online casinos, which can be of interest if mainstream gaming doesn’t really ring a bell. The best online casinos can be easily accessed, but only by keeping in mind certain factors that can help you choose the apt one – from licensing and security to a wide variety of games to take into consideration. Players, whether old or new, can also benefit from a plethora of rewards and bonuses such as free bets, cash backs, loyalty points and accumulator schemes.