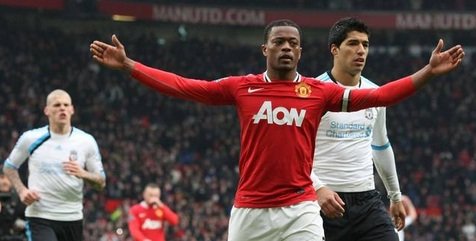 Editorial Feature
February 13, 2012February 13, 2012 Steven McMillan 13 Comments handshake debacle, Kenny Dalglish, Luis Suarez, Manchester United, Parice Evra, racism row, Sir Alex Ferguson
I should be writing a review of the 3 ring circus at Old Trafford yesterday. I should be doing it because that’s what I do. Before the match, I speculate. Afterwards, I reflect. It’s not going to be like that today. If you’re a Liverpool fan, and let’s assume you are considering you’re wasting some time by reading this, you don’t need to relive the 2-1 loss to Manchester United in minute detail. Continuing with the assumption that you’re a Liverpool fan, you’re probably not too keen on hearing someone else talk about the Luis Suarez / Patrice Evra pre-game, half-time and post-game debacle. You probably have your own opinion on that, don’t you? Sorry if it’s been beaten half to death, but, here’s mine.

I grew up in the punk rock scene; not shaking the hand of someone you don’t like or you feel has wronged you in one way or another doesn’t seem like a big deal to me. The rigidity of antiquated traditions or the pomp and circumstance of ceremony, especially ones such as a pre-match handshake, doesn’t mean much when a governing body is forcing 22 men to pretend they like and/or respect each other mere minutes before they’re kicking each other and trying their damnedest to have each other sent off.

This redundant practice does nothing to bring the kind of honesty into the game that the media has been clamouring for since the first Englishman claimed “their team doesn’t dive”. The stark refusal of the FA to do away with an obvious flash point, much like they did when QPR recently hosted Chelsea, was a mistake of, or at least close to, the same magnitude as Suarez refusing the hand of the man who he believes to have destroyed his future in England. Would you have shaken his hand? I feel a bit strange saying this, but even Gary Neville agrees with me.

Even as I write this, I question if I believe the words appearing before me. To be honest with you, it’s hard to form a concrete opinion. A blogger without an opinion? I know it’s hard to believe, but it’s the truth. In a multifaceted situation such as this, it’s next to impossible not to play a constant game of devil’s advocate while employing some serious Owellian-esque double think. You think you have a handle on the situation before everything goes terribly wrong.

Earlier in the week, it was confirmed by the club that Suarez would accept Evra’s hand if the FA insisted on a pre-match handshake. If he told Kenny he would do it and he went out his way not to when he knew the whole world would be fixated on this one event, then he’s a liar. While it may be simplistic to put it all down to that, when you’re caught in a lie, you begin to consider the possibilities. What else he could have misled us, and the club, about? While I maintain my belief in his innocence and decry the dubious manner in which he was found guilty, the advocate of the devil rears it’s pointed head.

Would it not have been easier to put it all behind us? Shake his hand and get on with the football? If Luis can’t make the decision to put the club and it’s fans ahead of his own personal feelings, is keeping him around truly worth it? If you forget for a moment the benefit the Uruguayan brings us on the pitch, this poisoned relationship could be doing us more damage than anything else. With our precarious league position making it difficult to attract top class talent, his presence could be detrimental to the recruitment process. Never mind worrying about players who aren’t even here, no one wants to be around someone they can’t trust.

The media painting us in a negative light is nothing new, but the damage the racism row and the subsequent fall out from something as trivial as a handshake leaves us in a horrible position with those who would rather have someone else make up their mind for them. Those that believe in sensationalism over reason and that Suarez’s actions mean he should never play for Liverpool again.

With irony only Kafka could appreciate, Manchester United manager Sir Alex Ferguson has called for the metaphorical head of the Uruguayan. Referring to him as a disgrace to a club he’s never gone out of his way to avoid disparaging, the United manager pontificated to the saps who do his bidding, and they lapped it all up. Did they not see the unmistakable hypocrisy in calling for Liverpool to sell Suarez when this same man stood by a number of players that maybe shouldn’t have worn the United shirt after their own moments of stupidity.

Red Devil’s legend Peter Schmeichel was accused of racially abusing Ian Wright under almost the same circumstances as Suarez. Who did Ferguson throw his support behind? He made life long criminal Roy Keane his Captain, then drug cheat Rio Ferdinand. Was Sir Alex calling for Cantona to be sold after he attacked an opposition fan in the middle of a game? You know the answer, but this isn’t about what Fergie would or wouldn’t do. His influence in the media is well documented and needs no further column inches, but would the reaction of those furiously typing away had been the same if Evra refused the hand of Suarez?

Had the tables been turned, Evra would have been lauded as a hero, standing up for the cause and showing that racism will not be tolerated. If Suarez did, in fact, racially abuse him, then I give the Frenchman credit for being the bigger man to extend his hand in the first place. It takes a lot to look your abuser in the eye while offering the other cheek; still the only people who will know what went on that day is the two of them and the actions of Suarez were those of a man who believed he had been wronged.

Fed up with all the negative press, the club has formally apologized for the actions of it’s player and manager after Dalglish was on the receiving end of some heavy criticism for defending the actions of Suarez during his post-match press conference. The striker and the Manager have also issued apologies which have been subsequently accepted by the United hierarchy who hope this whole sordid affair can be put behind us. No apology for the excessive celebrations of Evra after the final whistle or the fanzines confiscated before the match are expected to be forthcoming.

The irony, and futility, of this isn’t lost on me. Ranting about media bias and their obsession with discussing off-field matters rather than the game itself while I do the same proves my own hypocrisy. I should be writing a match review, shouldn’t I?

It goes without saying that my views don’t necessarily reflect those of the other bloggers here.

13 thoughts on “No Handshake Is Bigger Than The Club”