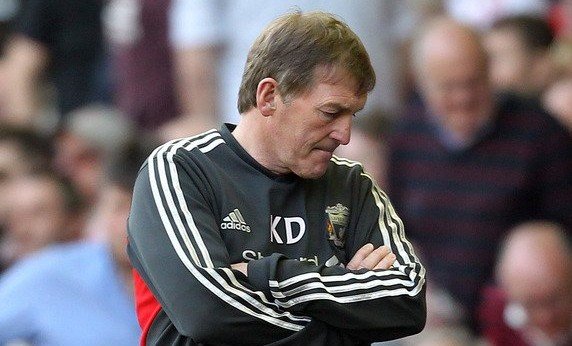 Match Reaction Premier League
March 25, 2012 Steven McMillan 7 Comments 2-1 losses, Andy Carroll, Disallowed goals, Gary Caldwell, Kenny Dalglish, Luis Suarez, Martin Skrtel, Raheem Sterling, Roberto Martinez, Shawn Maloney, Steven Gerrard, Wigan
You have to wonder exactly what’s going on at Anfield. A 2-1 reversal to Wigan doesn’t quite push the Latics out of the relegation zone, but it does heap the misery on the Merseysiders after a shock midweek defeat at the hands of QPR left the Kop faithful on what might be their lowest ebb this season. Even the introduction of 17 year old Raheem Sterling couldn’t paper over the dour display as Shawn Maloney and Gary Caldwell gave Wigan’s charge to push themselves out of the relegation zone and into safety some serious momentum. That sickening feeling of inadequacy is only getting worse as the boos rang out instead of the standard You’ll Never Walk Alone. Anyone who was looking for a response after the QPR fiasco is going to have to wait a little longer.

Wigan used to have the worst chance conversion rate in the league, but after today, their numbers are on the ups. A minimal amount of chances created, but  they convert two and we don’t even get to read the same old story. Usually, I get to say “we controlled the match” or “we ran them to the end”. Not today. I’m not even sure if the Reds knew what sport they were playing, let alone how to play it like professionals.

Who exactly was playing at home? The Wigan fans were making more noise than the entire assemblage of the combined stands and I can’t say who influenced who since I don’t know for sure, but either the off field noise effected the on field play or the other way around. Either way, we were all sleeping by the time  Shawn Maloney put the visitors ahead from the spot after a poor challenge from Martin Skrtel left Victor Moses KO’d on the pitch for no less than 5 minutes. Down by one in front of your own fans? You’d expect an immediate response, but a goal, or any real effort at all, wouldn’t come until after the break.

With Andy Carroll coming on for the anonymous Jordan Henderson, the impact was immediate as we pushed up the field and applied the kind of pressure we were lacking in the first half. Only 2 minutes after the restart, Luis Suarez leveled the playing field with a lovely sidefooted goal after some beautiful interplay with Steven Gerrard. Pressing a team that’s piss poor at the back always seemed like a good tactic to me and soon after a second for Suarez would be ruled out for a handball as the striker half crashed into, half shoved a Wigan defender off the goal line when Skrtel bounced in a header towards goal.

With us back on level terms and grabbing the match by the scruff of the neck once again, it was time for the other shoe to drop. We saw the first get unlaced and ceremoniously drop to the floor when Djibril Cisse leveled up for QPR on Wednesday. The second shoe was more or less already on the floor by the time Gary Caldwell put Wigan ahead with a shock strike, but the unmistakable clunk of the other echoed around Anfield and with that, all remaining oxygen was sucked out of the air.

Although the usual fightback would ensue, it seemed almost routine by this point; nothing more than a show put on so no one could say the squad didn’t give it a go. Except, we didn’t believe it. The lack of even the faintest hint of desperation in our faces was contrasted by the jubilation in those of the travelling support. They’re not used to winning and we’re getting used to losing. Old hat? I’m growing tired.

Roberto Martinez was ecstatic, smile beaming from ear to ear. Kenny Dalglish was deflated; that sour look of resignation has become an all too familiar sight. Sixth place? Seventh place? Our league position doesn’t really matter at this point. Putting in an effort, having some pride, remembering who you play for? That’s what matters now. We didn’t get that today.

When’s the semi-final again? I need a drink.

Need some cheering up? Head on over to the contest page and win yourself a brand spanking new Liverpool Home Kit from our friends at Soccerpro.com

7 thoughts on “Right On Time, Here’s the Other Shoe”