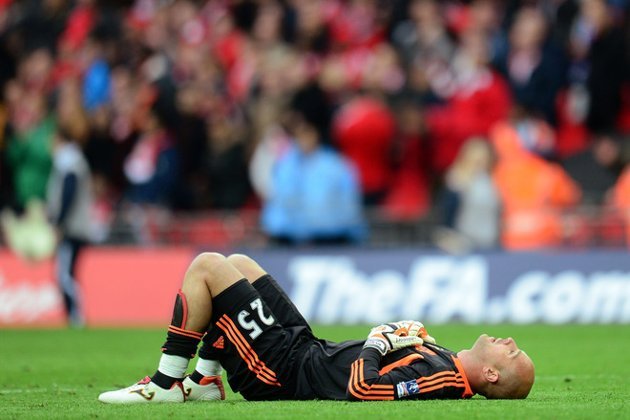 FA Cup Match Reaction
May 7, 2012May 7, 2012 Steven McMillan 1 Comment 2-1 losses, Andy Carroll, Chelsea, Didier Drogba, FA Cup Final, Gaston Ramirez, Jay Spearing, Kenny Dalglish, Roberto Di Matteo
Despite what the good people at the Disney corporation might lead you to believe, things don’t always end with sunshine, puppy dogs and a reprise of the theme from Beauty and the Beast.. Here’s what the boys had to say in their various states of inebriation…

There’s two words I keep expecting to see in the news when I wake up everyday: Dalglish Sacked. It seems inevitable and as one of his biggest supporters, I have a hard time explaining why he shouldn’t be. If Kenny stays with us another season, I’ll be happy of course. Perhaps Comolli had more of a say in transfers than we originally thought. There’s going to be a lot of changes this summer and film crews will be there for it to happen. I wish I could go to sleep until August and then have someone fill me in before the first kickoff. Until then, there’s going to be lots of nail biting about transfers and what not. In the words of Forest Gump, “that’s all I got to say about that.”

It took less than five minutes for it all to go wrong. Yes, I know that Chelsea had the lead in twelve, but it was starting to become apparent that it wouldn’t be our day far sooner than that. Ramirez capitalized on a double error from Spearing and Enrique to grab the opener, before Drogba doubled up early in the second half. The introduction of Andy Carroll brought about some hope when the big Geordie pulled one back with an unstoppable drive after bamboozling John Terry with some fancy footwork, but his second was called back and Liverpool quickly went the way of the buffalo.

That’s not fair or true; we were extinct long before that.

Having a goal ruled out, one that once again made the claims for video technology louder and far more relevant, didn’t kill us; we hardly came to life, let alone staked a claim for it at all. Blame it on Spearing, or Downing, or Skrtel, or Reina or whoever you’d like; this is a TEAM game and We didn’t have it in us or couldn’t be inspired enough to fake it. Chelsea are playing in the Champions League final; we haven’t even come close to qualifying. Could we have won? That’s for you to decide.

Every year is a rebuilding year. Next year is always ours.

One thought on “FA Cup Final Reaction: Somewhere, There’s A Story to this Moral”