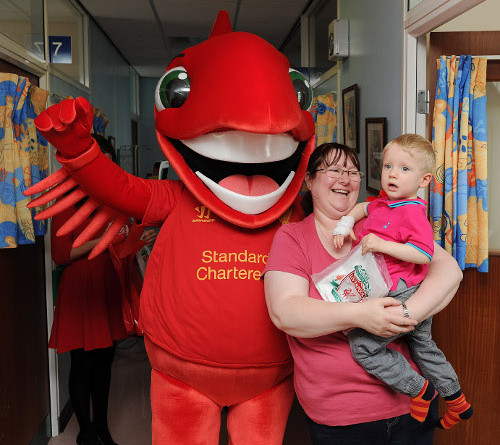 While patiently waiting for transfer news that was supposed to occur last weekend, and then earlier this week, and anytime now, I found a few things that annoyed me, disturbed me, and really freaked me out.

The Irish Independent tricked me into clicking on their link with the headline Gerrard makes move to new ‘club’. Now, I know he’s locked in for essentially the rest of his life, but curiosity got the better of me and I had to find out what the hell they were writing about at the Independent. Never fear, the captain was just using his vacation time to play some golf at a charity fundraiser. Country ‘club’ it is then. Bastards.

If you want to see something disturbing, check out the club’s official site. There, and at future matches, you’ll find the Mighty Red. The Mighty Red is our new mascott. He (I think it’s a he) is based on the liver bird–or possibly a shark, or maybe a lobster. I hate to be a Negative Nancy but I think the thing is creepy as f*ck. He has big anime eyes, an open mouth showing teeth, and odd things coming off his arms that are in no way reminiscent of wings. Am I being too harsh? Maybe I have some childhood issues to deal with. 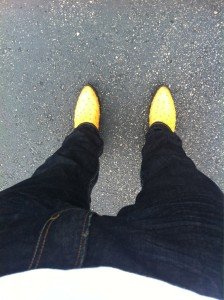 And finally, if the Mighty Red wasn’t disturbing enough, we can probably top it off with Paul Dalglish’s latest Twitter posts. The son of King Kenny is the head coach of the Aztex in Austin, Texas. Apparently, he met Jerry Jones, the owner of the Dallas Cowboys, and decided he needed to get a pair of cowboy boots. The Scottish cowboy later posted a picture of his new footwear. They are made of god knows what and are so yellow that we do not recommend looking directly at the photo without protective lenses. Paul is definitely following the city’s motto: “Keep Austin Weird.”  He also mentioned his mother-in-law stopped up the toilet. Cutting edge reporting from us at PaisleyGates.com