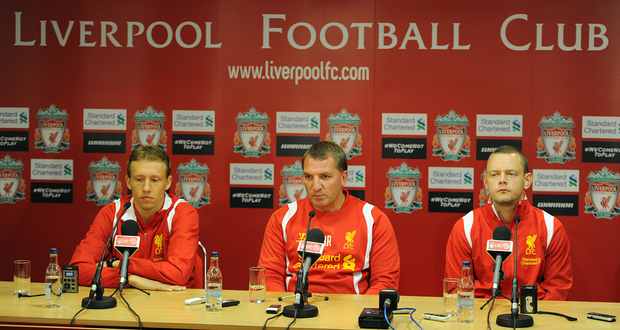 Match Preview
July 20, 2012July 20, 2012 Steven McMillan 0 Comments
Thousands of local and travelling Kopites are expected to descend on the Rogers Center on Saturday evening when Liverpool FC kicks off their North American tour against MLS side Toronto FC. Pre-season matches are all about regaining fitness after a few weeks of lying around doing nothing and giving the youngsters a chance to cut their teeth. Getting the likes of Joe Cole and Alberto Aquilani up and running again may require more than a few leisurely jogs up the pitch, but the squad has trips to Boston and Baltimore lined up as well so everyone will be given a shot to impress. This will also be our first chance to see what new boss Brendan Rodgers has to offer as he takes the reigns in his first match as Reds boss. You have to think all the way back to the summer of 2004 to remember the last time Liverpool washed up on our shore. Unsurprisingly, it was under somewhat similar circumstances.

Rafa Benitez replaced the popular Gérard Houllier at the helm before the Reds North American tour after a 4th place finish left the owners, and the fans, once again without the league title they so desperately craved. Former Swansea boss Brendan Rodgers was appointed to replace fan favorite Kenny Dalglish who, despite winning the Carling Cup and qualifying for the Europa League, failed to live up to the Champions League finish the owners, and the fans, expected. Benitez ended his first season by winning the Champions League and followed it up with an FA Cup the next year. That’s pretty lofty heights to live up to, but the North Irishman will just have to take things one match at a time; and tomorrow, we start at the beginning.

Although pre-season matches aren’t always the best indicator on how the squad will perform in the coming months, they’re always handy to give the fans a tactical preview of what’s to come. Rodgers has made a name for himself by employing the tiki-taka style made famous by the Spanish national team and FC Barcelona; it’s unlikely we’ll see the same fluid play during his first match in charge, or possibly ever, but without question he’ll be laying the foundation from the get go. So much has been made about building a footballing culture at Liverpool and emulating the famous Spanish and Dutch sides who played the same system from the ground up. The academy kids play like the reserve side, which plays like substitutes, which play like the starting eleven. Same system, same formation, same tactics, same philosphy.

There’s no better place to start then at the Rogers Center. Liverpool may have the best fans in the world, but Toronto FC can hold their own with even the heavy-weights. Describing them as rabid falls embarassingly short of the mark. Kopites are known the world over for travelling far and wide to support their team; Toronto fans are no different. If the team is in Chicago, Columbus, New York or Montreal, you can be assured that there will be TFC fans there and they’ll be making just as much, if not more, noise than the home support. Much like the Reds, they’ve had their fair share of ownership problems and in a similar vein, took the fight to the streets, the stands and the internet.

While the fans may have the fight in them, the side apparently do not and are currently engaged in a Mexican stand-off for the basement spot in the overall standings. Sound like easy pickings? Remember, this is only pre-season and the squad is far from being full strength with Steven Gerrard, Pepe Reina, Glen Johnson, Luis Suarez, Craig Bellamy and Andy Carroll either otherwise occupied — or in the case of big Andy — facing an uncertain future. Though the list of players who have traveled was released a few days ago, the one many of us will be looking forward to seeing, even if only a limited capacity, is Lucas Leiva who has returned from a season ending anterior cruciate ligament 2 months sooner than expected.

It’s been awhile since I had to write a match preview, but so far this has been my favorite one since I don’t just get to write about this one, but I get to see it. I’ll be in Toronto for the match and you can expect a full match report to follow. My sincerest apologies in advance if it’s riddled with nonsense and pant peeing.