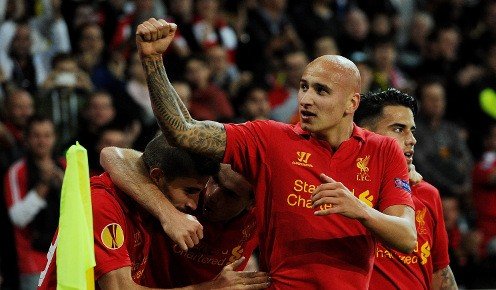 Video courtesy of the fantastic @MostarLFC

In the match preview I wondered, as I had many times before, where the goals would come from. There was quite the stir made when Brendan Rodgers decided to leave 8 first team players at home and fill the squad with mainly kids and those on the fringe. After getting out of Switzerland with a much needed 3 points and scoring 5 goals in the process, the normal narrative might be that “the kids want it more” and we should “play them all the time”. Obviously, this isn’t true and 5 goals against Young Boys, though welcome, doesn’t mean the same can be accomplished in the League.

Though we might not see the kids again for a little while, there’s a good possibility that one player that hit the pitch last night will feature against Manchester United on Sunday and that’s Jonjo Shelvey who broke the 3-3 deadlock and scored the winner at the Stade de Suisse to bring it all home. Two goals as a substitute reminds me of the Captain and if Jonjo can keep up the favorable comparisons, we’ll be seeing a lot more of him as the season rolls on.