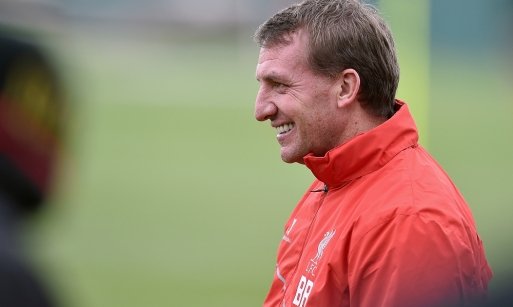 There’s few bigger fixtures on the calendar than when Liverpool meet Manchester United; with the race for the fourth and final Champions League spot set to add a suitably tasty sub-plot to an already traditionally stormy showdown, the typical deluge of media coverage has been amped up that much more. That this could very well be the last time long serving Reds skipper Steven Gerrard runs out against their most bitter rivals adds an extra angle to explore, but suggestions from some sections of the press that the 34-year old doesn’t warrant a place back into the team following his return from a hamstring injury has found his manager in a bullish mood.

“I think it has been really unfair on the boy. This is a guy who has been, and still is, a wonderful player. When he was out injured we had people trying to sensationalise a story as to whether he would get in the team or not, but Steven was unfit” explained Liverpool boss Brendan Rodgers with a notable sense of agitation. “He is now available but I can tell you now, and it may not be the story you want, but he is a guy committed to the team and the football club first and foremost. Playing or not playing, Steven Gerrard has unbelievable application and professionalism to his football life and is a wonderful ambassador for this club and a great role model for the players.”

With a mere two points separating the teams, Liverpool will have the chance to leap-frog the visitors into fourth place if they take all three-points making this one of the most important matches between these two sides in recent memory. Now, whether Rodgers will let sentiment rule the day or maintain his penchant for leaving a winning side well enough alone remains to be seen, but he wasn’t about to confirm or deny what his plans are — or be drawn into explaining what he really thinks about his counterpart in the Red Devils dug-out.

“United have a lot of talent. They had big investment to bring in world class players. Van Gaal has shown he’s a top class manager” said the Reds boss when asked about the Dutchman. “The competition in this league is fierce, and it is a very difficult challenge, different to other leagues. There is no question of Van Gaal’s talents. If he left United now, he’s still been one of the great challenges. It doesn’t matter what I think (of him), and I am sure he’s not bothered what I think!”