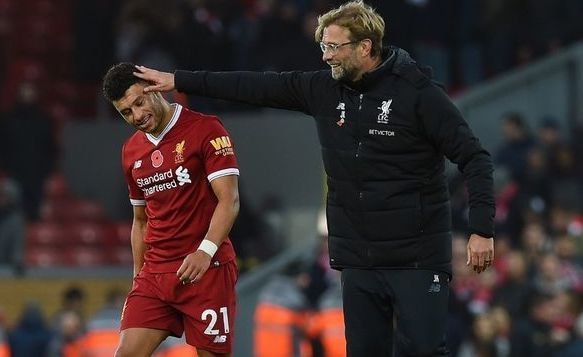 After marking his first Premier League start with a goal, Liverpool midfielder Alex Oxlade-Chamberlain is targeting a regular place in the Reds starting eleven as he eases in to life at Anfield following a £35mil move from Arsenal on transfer deadline day.

“It’s never easy coming into a new team with as much quality as we’ve got here. It takes time to settle in and learn a new formation and style of play,” said the 24-year old, speaking to the club’s official website. “The only thing I can do when I get the chance is try to impress and help the team to win, with goals and creating chances,” continued the former Gunners midfielder. “I’m going to keep trying to do that and keep pushing for starting places, just as everyone else will. That’s the best thing – competition for places.”

Having seen Liverpool captain Jordan Henderson ruled out of the meeting with West Ham United at the weekend, Reds boss Jurgen Klopp called on Oxlade-Chamberlain to fill the gap — and the midfielder’s all-action performance garnered almost universal praise. Quick to put a foot in and showing an eye for a pass, Chambo slotted right in to the team and adapted quickly as the German manager set up his side to defend deeper and stay more compact against the physical East London side.

Far from the finished article, the 24-year old knows he still has work to do. Left out of the England team that’ll square up to both Germany and Brazil in prestige friendlies, Oxlade-Chamberlain will spend the international break at Melwood under Klopp’s watchful eye.

“It was very intense for him, completely different to the things that he’s used to. He did really well. I know for these offensive skilled players how difficult it is for them to have me all the time shouting,” said the Reds boss, speaking to the press following the win over West Ham. “I just like this player because he’s already experienced but so open to get used to what we do and that’s really nice. He needs to get used to the intensity that we ask,” explained Klopp, knowing it’ll take time. “He knew when he came and we signed him that this will happen and we would ask for this and it’s nice. He’ll be a really important player for us.”