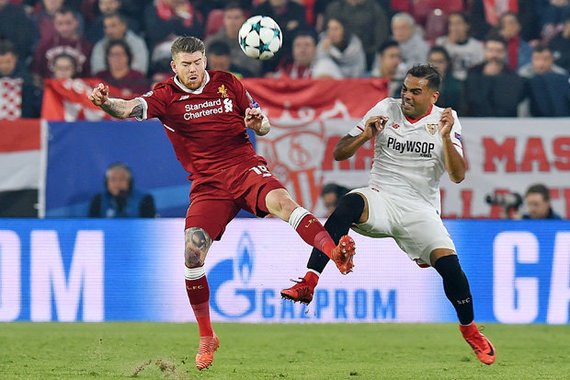 Up until last night in Seville the story of Liverpool defender Alberto Moreno’s season has been one of redemption after the Spaniard fought his way back in to the starting eleven after spending much of last season on the bench, but the fullback had a night to forget on his return to the Estadio Ramón Sánchez Pizjuán.

Kicking off the second half with a commanding three goal lead, the Reds looked to be headed straight for the Knock-Out stages of the Champions League, but a double from Wissam Ben Yedder — a header from a free-kick and a strike from the spot with Moreno culpable for both — ended with the Spaniard getting the hook well before the final whistle.

“We highlighted him before a ball was kicked,” said former Liverpool captain Graeme Souness. “It is as if he doesn’t understand the position. That is an incident where he comes into the middle of the pitch unnecessarily. Here is where he gives a free kick away unnecessarily. It was just clumsy. He never looks over his shoulder to see where the danger was coming,” fumed the Champions League winner, skewering the performance of the Reds defender on TV3. “He frustrates the life out of me. I think he is an accident waiting to happen.”

The introduction of Emre Can and James Milner helped settle the nerves and though it looked like they might hang on for the win their hosts completed their improbable comeback deep well in to stoppage time when Ragnar Klavan’s ineffective headed clearance fell to Guido Pizarro to poke home — the second injury time equalizer they’ve conceded this season.

“The second half was an absolute abomination. Complete and utter schoolboy defending. And I’ll tell you what, for me, the blame has to go straight down to Klopp,” explained another ex-Liverpool star in Steve Nicol. “When you’re 3-0 up away from home in Europe you keep it tight. You move up and back as a unit,” stressed the ESPN pundit. “You don’t go, as I said, schoolboy when you go forward and someone makes a bad pass and you’ve got four players out of the game. You’re encouraging the opposition to come at you.”